Don Jordan, the father of the series drogues, suggested a chainplate of conservative dimensions, but did not detail the design. He wanted to keep it simple so that people would use them. Most commonly, these plates are installed horizontally, because that looks right. But what if the pull is not horizontal? 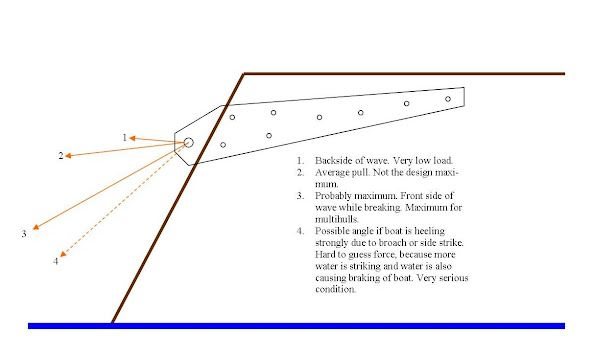 In my limited experience, and based on what I think is common sense, the strongest pulls are from a downwards angle. From basic engineering statics, the largest bending forces are near the transom end, and the largest shear loads on the bolts will be when the load is off-axis. That suggests either more or larger bolts near the transom, but more will better distribute the shear stress load to the laminate.

Hardly a detailed analysis, just thinking. In practice, it would be simpler just to build it oversize, though internal reinforcement of the laminate might be avoided by this sort of design.