My PDQ came with a very functional set of non-adjustable lazy jacks. One block, 2 legs; perfectly adequate with a full batten main. Chafe has never been an issue; the main is original, reasonably blown-out from years of use, and yet not a stitch has frayed. But they can be annoying on the hoist, catching the top 2 battens. In lighter airs close attention will do, but in rough conditions it can be a little pesty.

Anyway, a $20.00, 2-hour project, including the time spend figuring and returning wrong parts to the store. Maybe I can save you a little time.

The Harken system is adjustable and fancy, but not optimized to be retractable. Not much better than the PDQ system; the PDQ system could be adjusted by retying a knot on the boom, but in practice, once it's set, it's finished.

The EZ-Jax System looks easy. I've seen them on boats and watch the demo at the Annapolis Boat Show. But they have some features I don't like:

I drilled and tapped  4 holes, mounted 2 small cleats on the boom, and replaced 2 lines, all from the comfort of the hard-top.

I suppose you could even make the system single line, adjustable from one side. No one does, because in reality, the lines often need to be worked around wrinkles in the flaked sail, and that would be very difficult if the cleat was on the other side.

The down sides?
The upsides? 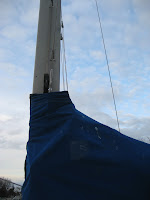 Do I recommend this project? If you like having more things to tweak and like small improvements, sure. If you single hand a lot, absolutely yes. If you like bare simplicity and can hoist OK with fixed lazy jacks, leave them be.

There I was, minding my own business, refitting the fuel filters a few weeks ago. I smelled something hot, something electrical. 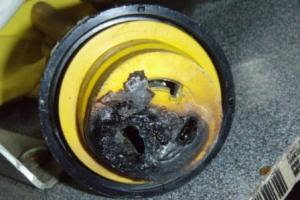 I reached over and touched the plug-in and it was smoking hot. No visible signs--no smoke or glow. It was fully engaged and not corroded. It was not at full load--only about 14 amps on a 30 amp plug. In fact, I don't leave the boat plugged in--I used solar for charging and only plug-in when I'm there. And the end I move is the dock end (this is the boat end).

So, yes, it can happen in a heartbeat, and I'm glad I was there.


____________
(not my picture--I pitched the plug in my haste and horror--but I can't see anyone minding repetition of a safety reminder. The extent of damage was very similar.)
Posted by Drew Frye at 5:32 PM 2 comments:

... but I'm guessing you already suspected as much. 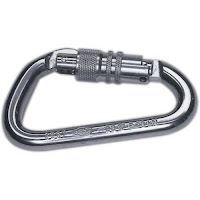 or this for $13.95. And the Petzel biner is anodized too. Additionally, Whicard missed the UIAA safety memo advising that auto-lock biners not be used in dusty sea coast areas. Must have been busy raising the price. 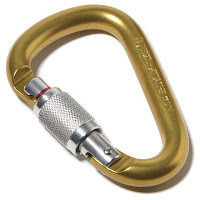 West Marine must get some really stupid--pardon me, non-climbers and folks with way too much money--customers, at least from time to time. These are nearly identical in design, meet the same same specifications, and use the same materials of construction. In actuality, the Whichard biner ($89.00) is just a common climbing biner with a silly price.

No, I didn't buy it. I have a life-time supply of biners. I was looking for something else (shackle) which they didn't stock. They only stock the very high-end shackles; you have to special order the more reasonably priced ones....

I am so glad a nice hardware store with an emphasis on marine stuff opened in Deale. They don't have everything, but their fastener selection is fantastic, far better than WM. I got out for less than $5.00 (2 small plastic cleats for a lazy-jack modification), which I always feel good about. The hardware store had the rest.


_______________
I've got an article on climbing gear for sailing coming out at some point. Marine prices forced the issue:
I could never afford climbing, not priced the boat store way.

I wish I could sit down and whip off pages of graceful prose or riveting stories. I can't. Writing is hard for me and I struggle with it. I maintain this blog for practice, as much as anything.

Because most of my posts are factual and engineering-oriented, I like them to be correct. Because most of my traffic is via forums and search engines, most of my traffic is reading and re-reading older posts. In a typical month only 20% of the traffic is directed at posts from that month, and generally 30-50% is directed at a short list of 10 posts that were written months to years before. For example, this week 10% of the traffic was to a single 2-year old post on sea anchors. Thus, I often go back and add new material to old posts, rather than start something new. While there are certainly errors and poorly written bits here and there, I try to correct anything that is pointed out to me as unclear or just wrong. Sometimes I correct the revision date, but sometimes I don't. I almost always revise posts a few times in the first few weeks, if it's a post of any substance.

I hope you use the "search" function occasionally, anytime you wonder about some dumb thing I said in the past. I may have smartened up and fixed it. If it was a rant, well, I may have piled on more!

I don't know why PDQ left hinges off the locker covers. They didn't cheap-out much. But they missed this one. Every time you need just one little thing, off comes the cushion, the lid must be leaned somewhere.... A big pain. With a hinge, lifting the lid just a bit to snag just one thing is reasonable.

Six months after I added them I noticed that the new Gemini Legacy is set up this way. Some thing they got right.

I added hinges to my under-berth lockers some time ago, and it was a big improvement. They get used a lot more. 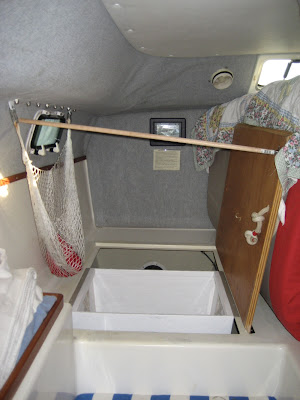 I added these drop-in trays to the salon lockers. A big help--commonly used and small items don't disappear into dark corners. 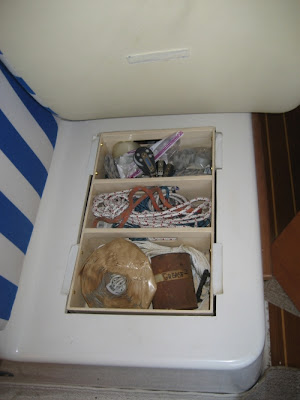 And now I've added hinges to the salon lockers. A big help. 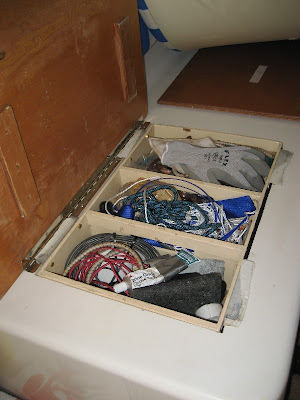 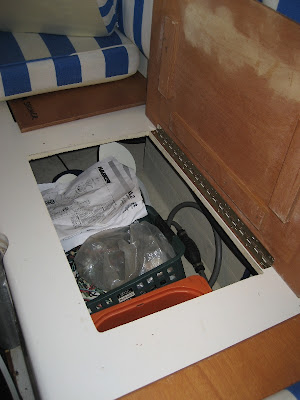 
Once a has-been town with a tired and small mixed use harbor, a major renovation is changing the face of Cape Charles. Additional slips built in the late summer / fall nearly doubled the recreational harbor capacity, and new bath house and harbormaster facilities are going up even as we speak. Vendor facilities are planned.

The Master Plan. The slips are compete and the building in progress. 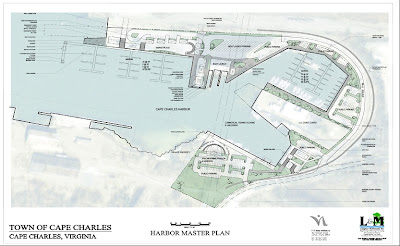 An improvement? I'll miss the shallows where we used to collect monstrous hermit crabs....
Some of these are 5 inches, tip-to-tip﻿

... but this town deserves a revival. Once vital place with both rail and passenger ferry service to Norfolk, it strugled through many decades of business failures. While that sort of commercial and industrial activity is past--the bridge killed it for good--there is historical value in this town, the access to the southern Bay and Ocean is excellent, and small businesses are fighting to bring the main street back.
Passenger Ferry Docks 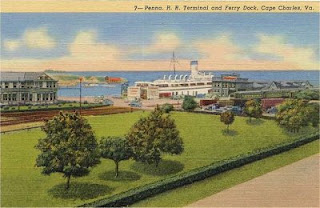 Nicer facilities for the trailer sailor, fisherman, renter, and transient for certain. I suppose I'll miss some of the commercial flavor. I worry that recreational use often moves working boats out, but I believe Cape Charles remains committed to mixed use. They are committed to maintaining a balance.
Delmarva Now Article

Cape Charles is a key stop for many boats circumnavigating the Delmarva. These improvements will certainly be welcome.
Posted by Drew Frye at 8:47 AM 2 comments: