A Tiny Cart for Serious Hauling 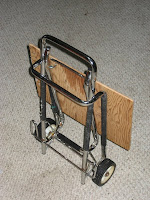 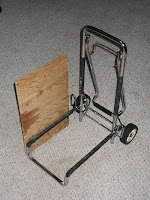 The Really Cheap Solution
As a cruiser, there is often the need to haul food, ice, jerry cans, or laundry. Back packs help, but they don't accommodate awkward sized objects, volume is limited, and a full jerry can is just too heavy after a few blocks. Fold-up apartment dweller grocery carts are too big to store and still don't manage awkward and over-sized items well. Luggage wheels can handle the weight, but they don't handle floppy items and bags. However, when fitted with a folding plywood platform, the shortcomings are resolved. I could have painted the wood, but I reasoned that would only make it slippery. The hinge is nothing more than a few cable ties threaded through drilled holes. Friction tape on the tubes helps too.

A $2.50 thrift store solution that proved itself over a season. Tip: find the sturdiest set of luggage wheels available. Some are junk.

The Pretty Cheap Solution
Mostly, because I found this one at a marine thrift store for $5, but I like it even better and I think I'd pay full price if it came to that. I know, most of us would rather sell our children that buy something at West Marine that is available elsewhere--and often the their price makes us consider that--and sure enough, it's actually a file cart available from Office Depot for $7 less.

It easily manages a 5-gallon can of gas and a few more bags stacked on that and stores in no space at all.I did break the top hinge when I carried my air conditioner with it, but that was my fault; it was too heavy and placed terrible leverage on the sides. It was easily repaired with a few 1/4-inch holes ad some cable ties, reinforcing the partially damaged hinge. Not as rugged as the luggage wheels, but generally more handy. 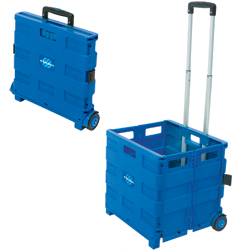 I Admit it - Sometimes it's Just too Cold to go Sailing...

...So we go go ice climbing instead.

Jessica has just grown to the point where the crampons and ice axes - razor sharp tools of the trade - and other gear are sized properly; they don't make kid's sizes in this sort of gadgetry. Most likely this is a safety measure intended to protect children from the hubris of their parents, and to protect parents from the urge to place razor sharp implements in the hands and on the feet of a teenager.

But what can be more fun that a day in the woods spent playing in snow and ice with kids? Many things I supose... but we had a fine time.
Posted by Drew Frye at 8:06 PM 2 comments:

My daughter's assignment when coming along side while cruising is to step off the bow with a line. On our Stiletto--with no lifelines--this was simple. With the PDQ's lifelines and short legs it is very tricky, and even taller people can only step off with planning and caution. I have never understood why gates in the lifeline at the bow are so rare. 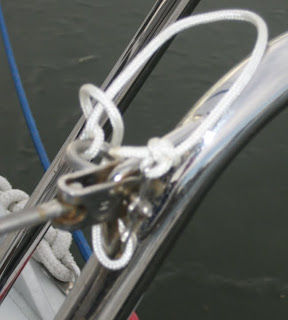 To install pelican hook gates would require new lifelines; too much money when the current lines have another 10 years left in them.  Quick release pins were another option, but they weren't a perfect fit in the existing toggles. Instead, I simply replaced the existing clevis pins and their difficult-to-work circle clips with over sized pins made from  1/4-inch eye bolts, secured with stainless hitch pins. This did require drilling small holes in the 1/4-inch bolts. Use a sharp drill, steady feed, and copious oil. A stainless cutting fluid
The one difficulty. Because the lifeline is not fixed to the stanchion (ISAF regulations only allow lifelines to be fixed at the pulpit and stern rail or equivalent strong point), the lifeline will go slack when the bow attachment is released. I undervalued this problem at first, since we only release the bow gates when docking, and that only rarely. Eventually, I stumbled at the dock, grabbed the line for balance, and went strength down, the head of the stanchion smashing into my should near the collar bone and only just missing critical rotator cuff muscles. The could have been a career ending injury. The solution was to lash the lifeline to the foremost stanchion, leaving a little room for stain adjustment, honoring the intent of the ISAF standard.

Total cost: If you buy everything, about $2.75/gate at Home Depot, but you may have some of what you need as spares. I had everything in the might-need locker. I guess after 30 years of sailing the might need locker gets large.

Note: After 10 years we're still happy. When we replaced the covered lines with Dyneema we kept the basic mechanism.
Posted by Drew Frye at 7:44 PM No comments: