Man, We're Getting Old... and It's Getting Worse 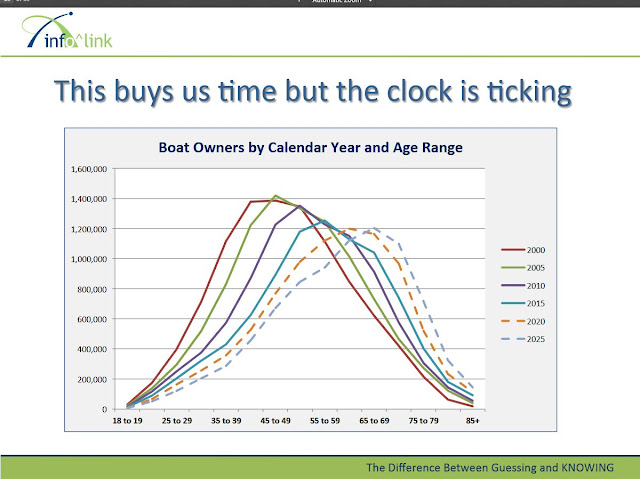 The conclusion of industry analysts is while new boaters come and go, the core of long-term sailors is stable. Those of us that become addicted occasionally sell a boat, but then by replacement. That's certainly my story, having owned a beach catamaran, Stiletto 27, PDQ 32, and now a Corsair F-24 Mk II.

Unfortunately, new boat owners come, but mostly go. As a result, boating is in gradual decline. Some point to New Age alternatives--the internet and other sports. Some correctly point out chartering is on the rise--boat ownership and all of the maintenance that goes with it is a good fit with the new generation.

Small boats are still a healthy industry. My daughter, for example, would love a sailing dinghy and I'll bet she'll buy one someday. But you can't see her owning a bigger boat. It wouldn't fit her needs, and the maintenance and fiddling would never hold her attention. I can see that. It feels pretty irrational at times to me.

The result is that we sailors are getting older and older. It doesn't just seem that way, it's true. I'm okay with that. By the time the sail population ages enough that my target market has evaporated, I'll have run out of things to write about.

Masthead wind indicators are ubiquitous. Unfortunately, they can be hidden by sails, put a crick in your  neck, and take your eyes away from where you are going. 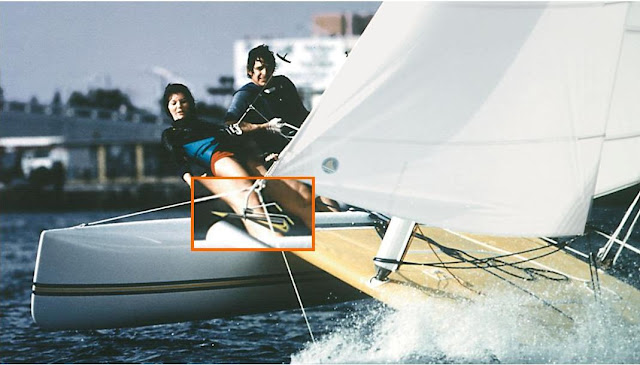 The highlight vane is enlarged 2x.

On beach cats, a vine under the bridle is common. It's right in your line of sight when the action gets fast and allows you to watch the lee bow, as it tries to turn submarine.

I've always had vanes on the bow. The crew like them both for sailing, and just as much for hoisting sail and anchoring; they arn't all sailors and they don't like looking up while driving forward. They have a point. It can be tricky to locate them so that they are not damaged. In this case, the pulpit and the bow sprit up-haul line (blue) have kept them safe. 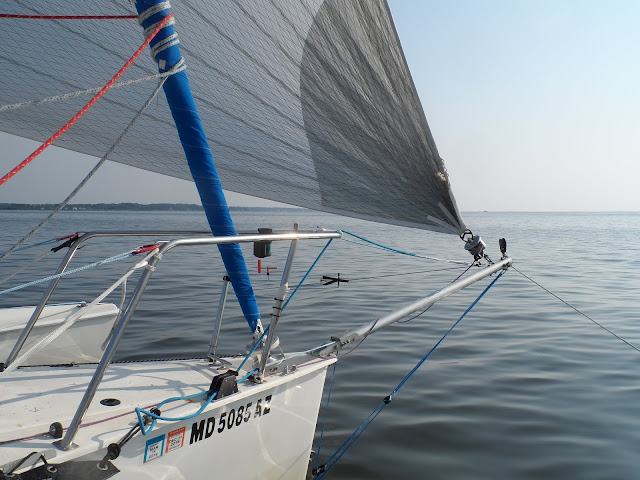 Why two vanes? I have been testing vanes for 2 seasons for an up coming article, rotating models from time to time. There is nothing like time-in-service to sift out the top performers. You would think the air would be more disturbed by sails. but in fact they reflect only a slight curving of he wind near the sail.

The Bottom Line. I like them all. I find them handy on every point of the sail, but perhaps most useful tacking and jibing. Look for the Write-up in Practical Sailor Magazine.
Posted by Drew Frye at 5:12 AM No comments:

Multihulls love bridles, but going out on the skinny amas of a trimaran to rig that bridle is uninviting if there is any chop. Thus, I leave mine rigged but retracted. 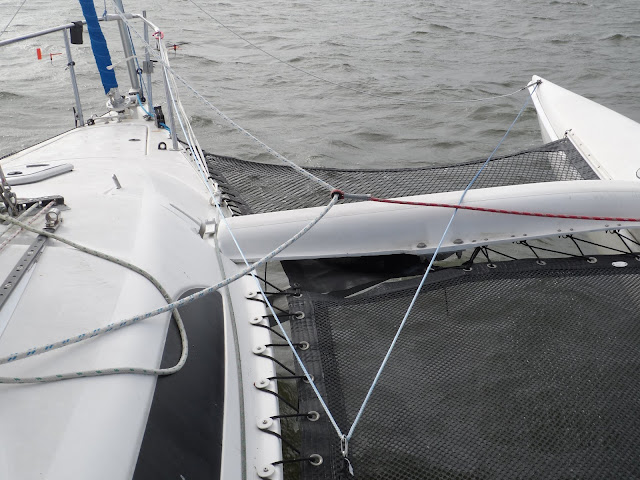 The line is over-size Dyneema; about 15x maximum working load, including allowance for single leg loading. The normal load factor for Dyneema would be about 4x, so this allows me to loose 75% strength to UV and wear before reaching the WLL. That should take over 10 years, based on available desert testing. This also squares with my personal experience with old Dyneema.

When not in use, they are pulled back to mid-tramp by a Davis Instruments Mini-Shockle (a very heavy duty bungee). The front end is secured to the pulpit with a carabiner. 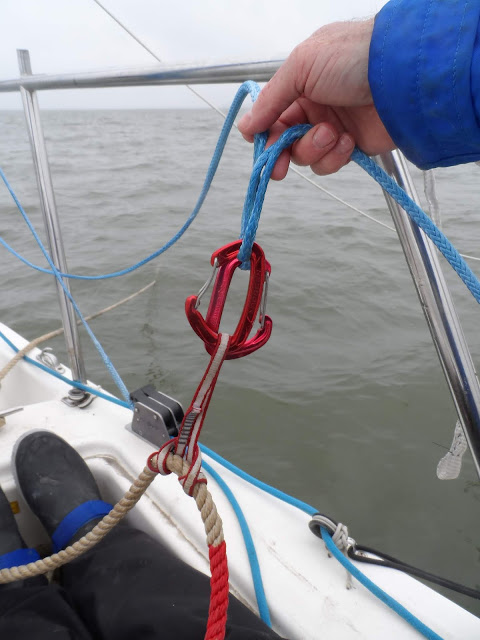 To deploy, the Shockles are released and the carbiners are clipped to a prusik sling.

To learn more about anchoring with rope, visit Practical Sailor Magazine. This last image is from and up-coming series on anchoring without chain.
Posted by Drew Frye at 12:22 AM No comments:

In 2017 a new No-Discharge Zone (NDZ) was established in the Puget Sound. In stead of allowing discharge of treated wastes 3 miles from shore now there will be none. The local cruisers feel they have been demonized, but in reality it is the cruise ships that were targeted.

The Puget sound is unique in that it is the ONLY large bay where the 3-mile rule applied. All other bays (Chesapeake, San Fransisco, etc.) are considered inland waters, and all discharge of untreated waste is banned, whether 3 miles from shore or not. But the Puget sound is shared with Canada and is thus not the inland waters of the US.

Because the navigable waters are regulated by the federal government, the state has no authority to regulate discharges from boats, OTHER than requesting NDZ status from the EPA, which is quite easy, so the Washington state EPA had only one option; NDZ status.

NDZs began with the Clean Water Act (CWA) in 1972. They are often seen as political statements. 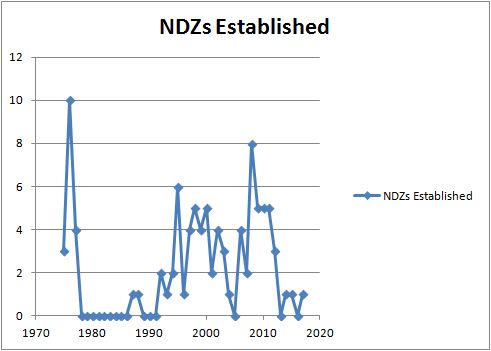 I'm not seeing a correlation with presidential party affiliations. There was a predictable burst when the law passed, no interest nearly a decade, and then a pretty steady rate since. The last Bush administration implemented 4 more NDZs than the Obama administration. If there are politics, they are local in nature and consistent.

Perhaps the rate is now declining, as the map gets filled in.

Interestingly, the Friends of the Earth petitioned the EPA in 2010 to allow several popular high-efficiency treatment systems, arguing they were better for the environment than a ban. How about them apples? It seems they believe that good treatment is better than the cheating that otherwise takes place. Rather like ethanol gas, the full cost of the regulation and the unintended consequences are not always considered. In this case, however, I think it is more a matter of the convoluted nature of regulations; the Washington EPA saw NDZ as the only available option.

Sadly, I don't think the effectiveness of treatment systems, such as the Rairitan Electroscan, is well understood.
Posted by Drew Frye at 1:57 PM 1 comment: