The Problem. Every year yachts suffer significant damage when a mooring line wears through. It can happen in days and often owners leave their boats unattended for 6 months at a time. Often several boats in a row are damaged and the insurance claims are a mess. Often, much of the cost is out-of-pocket.


After 4 years, only a little fading. Without protection, the previous line was cut 50% though in one winter storm by a sharp stanchion edge.

Proper chafing gear is a yacht saver, but the traditional offerings are flawed:

The Solution. The line must float inside the anti-chafe gear, while the anti-chafe gear must stick to the roughs areas. When the gear sticks to the rough spots, there is no motion so there is no wear. When the line slide inside the slick nylon webbing there is little friction and thus no wear. Typically the greatest loads occur in wet weather--hurricanes come to mind today--and wet nylon on wet nylon or polyester is very low friction and low wear. Instead of fighting abrasion--and you can't win in the long run--we have designed a simple low friction bearing.


Here we see 1-inch climbspec webbing allowing a snubber to pump in and out with the gusts, without chafe or friction.


After 4 seasons, the dock is worn, not the gear. 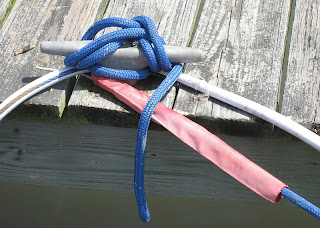 Tested for over 15 years in marine, industrial, and mountaineering applications, the design is ridiculously simple, and thus, absolutely reliable.

Too much bulk? Although this coating won't stop sharp edges, it will slow abrasion from wood and relatively smooth surfaces from 5-10 times. I thought this was snake oil until I used it on a mooring line for 5 years. Now it is on many of my splices and on the furler line, where it has dramatically increased life. I recommend using clear, since other colors can transfer to the white deck. 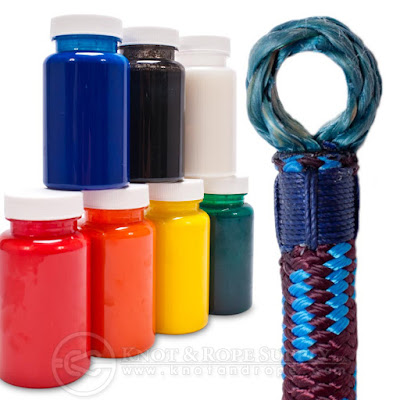 Really severe chafe problems? I visited Lahaina Harbor on the western shore of Maui a number of times; most of the boats there use chain as chafing gear. The harbor is prone to continuous surge, sometimes severe and the bulkheads are concrete and steel. This picture is from somewhere else, a far less sever case, but it's the same idea. If you are tying to very rough docks and have surge, this is what works. At the boat end they mostly use webbing, but some have chain at both ends. 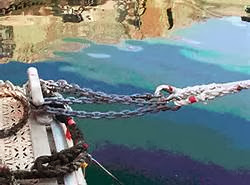