Several years ago I posted about repairing massive separations in my approach shoes using Locktite PL S-30, a Home Depot caulking product with great adhesion and flexibility. I wire brushed it, over-filled it with the polyurethane, and removed the excess with a grinder. Much abuse later, it's hanging in there. I credit the higher flexibility better moving with the shoe than the traditional Barge Cement. 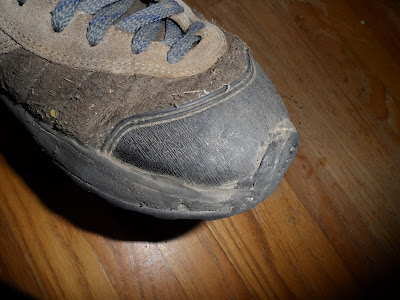 A few months ago I decided to repair the rand on my favorite rock shoes, which had start flapping years before but had become extensive over time. A little more complicated this time, involving masking tape and wax paper, but so far so good. Trust me, I've treated them badly. 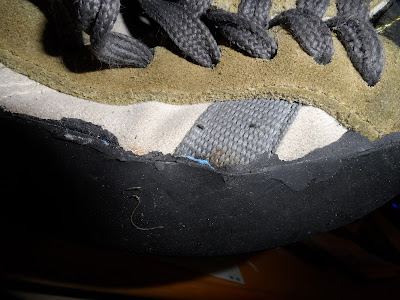 Pretty amazing stuff. I'm finishing an article testing strength of about 20 marine caulks and an article on repairing canvas and sails without sewing. This stuff can be amazing repairing canvas, particularity if sandwiched between layers.

Six months ago I was asked to review boat hooks for Practical Sailor Magazine. Everybody needs one. How dull I thought; I've never bought one, not in 30 years. I always find them by the dumpster or on the beach, and have a stack of "spares" at home that I haven't used yet. Keeps me from getting to choked up if someone drops one. Most days we just drop it in the middle of the tramp--I've never lost one from there, even in heavy going, though I generally tie it down when it starts banging into things.

Everybody does need one.

And low and behold it was more fun than I thought.

How about this classic crabber's  hook? It's been hanging on the wall in my daughter's room for years, after I found it tangled up in my docklines after Isabel (I left in on the dock for 2 weeks, but no one claimed it). In fact, it was perhaps the best balanced and most suitable for all-day heavy use. No surprise. 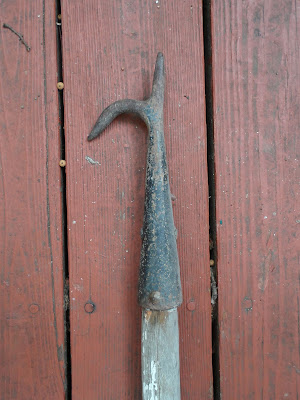 The old guard vs. the new kids. Second from the left is my every-day pole. 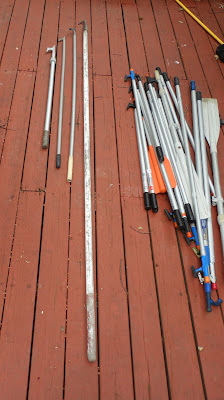 I wonder who got the bright idea that a boat hook makes a good brush pole (I'm not picking on West Marine--they are ALL like that now)? All it does is snag lines. Unfortunately, about 1/2 of them won't screw into a brush because part of the hook is in the way. And nothing can be screwed into the "take" part of the hook anyway, so what's up with threads there? Worst of all...

... the bulbous padded tip makes them useless for snagging a line off a piling or dock... 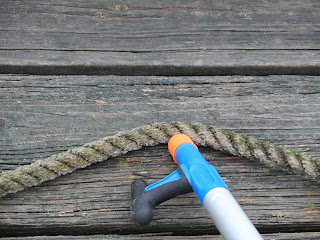 Which all of the old-school poles can do easily, but only ONE of the new poles. Not an improvement in my opinion. 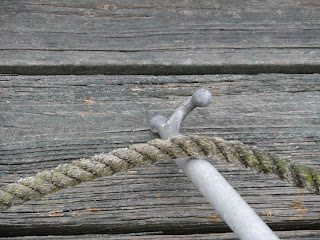 Eight Days in the Mid-Chesapeake

After a night on the boat in Deale, MD, I was able to make an early start while the group slept in. This is the easiest way for us, avoiding the rush of driving and loading up. A 10-knot north west breeze made for nice 6-8 knot reaching conditions with the spinnaker, but it ran out and our speed piddled down to 3 knots by the time we neared Solomons Island. Since our goal was Smith Island, and drifting at 3 knots wouldn't get us there until the wee hours, I motored on one engines, which gets us 5.5-6.0 knots, and bit more if motor sailing or if the tide is favorable. It puffed a bit again as we neared Smith Island, this time from the southwest, and we were able to beat most of the way at reasonable speed. The travel time was about 10 hours.

Jessica scampered off to Ruke's--the main reason for our stop in Smith Island--only to find that Ruke's had been closed for a year, a consequence of her husband passing and health issues of her own. Too bad, she was an icon, known for the best crab cakes on the Bay. People in Crisfield would even order take-out, via  the tour boat! But the Bayside Inn serves some excellence fair as well, and the view from the deck is very peaceful. 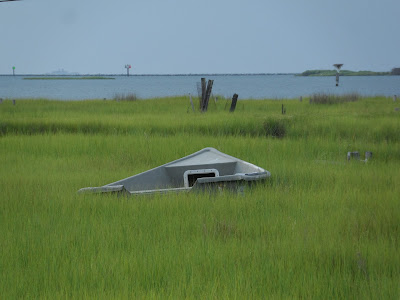 Can you spot the American Mariner (US Navy target ship) in the distance?

In the morning we headed across the channel to the Swan Island (the land to your right as you enter from the west) for a little kayaking. The low-light of of our trip was the $90 ticket I got from the DNR on the way back for having too few PFDs. Yes, I know better, and I even made a comment about going back on board to fetch a second when I realized we were short one, but laziness overtook. Heck, we would only be crossing about 100 feet of channel where we couldn't get out and walk! The first time, and not a mistake I will make again. I have been pulled over by DNR numerous times in 30 years, always by officers clearly prowling for a quota. This was the first time they ever found anything wrong. 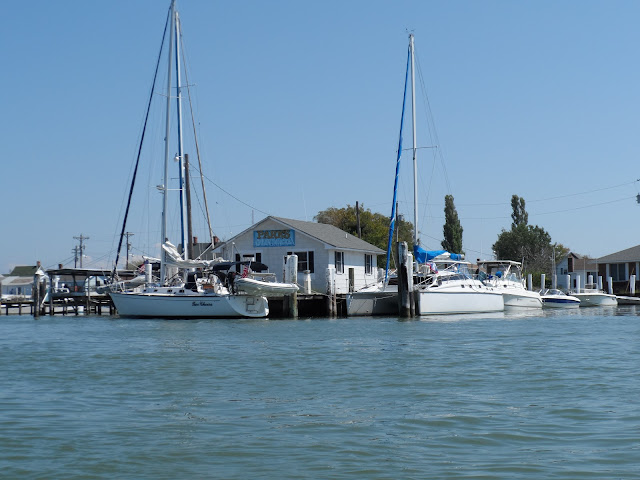 At noon we left for Tangier, only 10 miles to the south. Little wind, but only 10 miles to cross. The bulkhead at Park's was full, so we tied up to a piling and I kayaked over to the marina to help Mr. Parks (he's 85 in just 2 weeks) move some boats to make room, which was simple. Unfortunately, the resulting gap was only 3 feet longer than my boat and shorter than my diagonal, requiring some fancy sideways maneuvering, greatly aided by very light wind and a slack tide. Here we would stay for 4 nights. 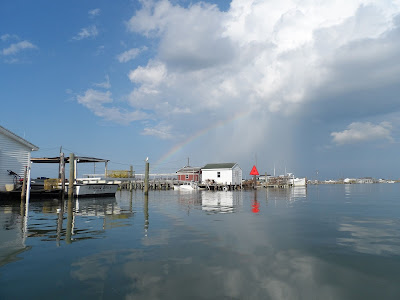 A small storm passed to the north.


The next 4 days were divided between uneventfull fishing, swimming, kayaking, and generally relaxing and waiting the world float by. Our Tangier visits are pretty low key.


About a mile north of the channel in the Upards, west side. 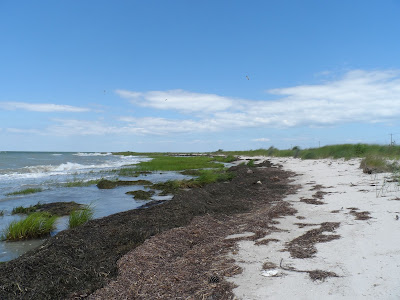 This waterman decided to make his shedding operation dual purpose, adding a sun deck and a little bright paint. Many evenings there would be a group eating dinner and catching up. 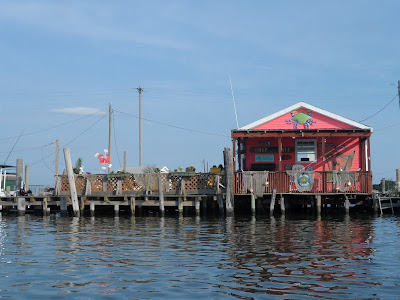 Lack of real estate means that most shedding and docks are actually on the water. A skiff is used to commute, many times times each day.

The remains of a retired travel lift. There is a functional lift on the other side of the harbor. 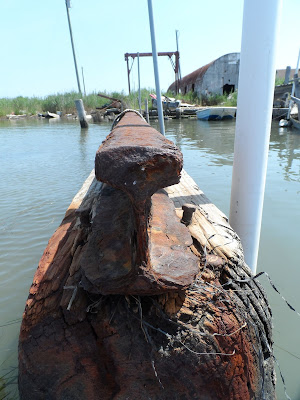 With a marginal forecast including a chance of thunderstorms all day over most of the Bay, we headed north to Solomons Island in a nice 10-15 knot southerly breeze. The spinnaker would have been nice, allowing us to sail deeper angles, but given the towering clouds it seemed a little risky. Thus we alternated between a broad reach and wing-and-wing, weaving between the squalls and catching only a few weak gusts and perhaps 10 minutes of rain. We spent a hot evening on the hook.

Again, the wind was from the south, but virtually nonexistent until afternoon. Given the heat, we motored to Parker's Creek, where we enjoyed a kayak break, and then on to Deale.

This is what a boat is for. Simply idyllic. No powered boats, only kayaks, are allowed in Parker's Creek. The beach itself is protected due to endangered tiger beetles (stay on the wet sand). 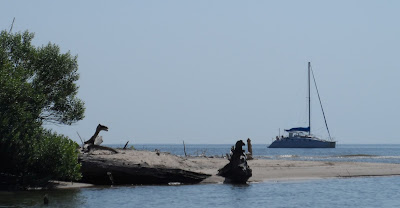