Cheston Creek off the West River

I needed and over-night get away, the prevailing winds suggested the western shore north of Deale, and I always search out places I haven't been before.

I anchored in 8 feet of water just a short distance inside the mouth. I'm not too certain how much deeper I could have gone, but there was a fish trap just a few hundred yards farther in, so it seemed pointless. Holding is solid, but it is exposed to the south and east. 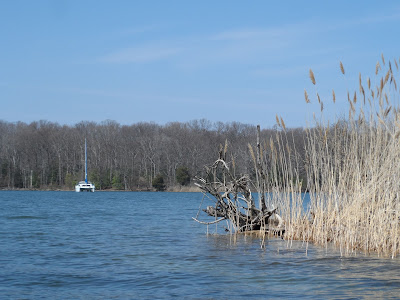 There is a nice sand spit sort of beach just inside the mouth, probably off limits but certainly inviting for a few moments walk.

A nice thin about Spring and Fall sailing is the clarity of the water. Not island clear, but enough to see 6 feet easily. 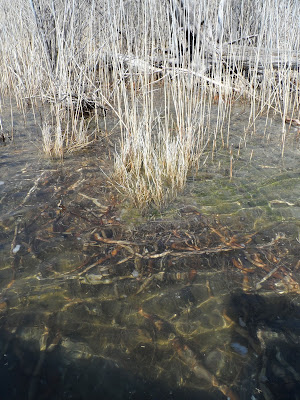 The creek is a wildlife management area, shared between the Smithsonian and local farmers and is well screened with trees. I bobbed mindlessly by one downed tree, watching a ground hog busy himself preparing a burrow for a littler to come. A hundred yards further down the creek s red fox was doing the same sort of sring house keeping. 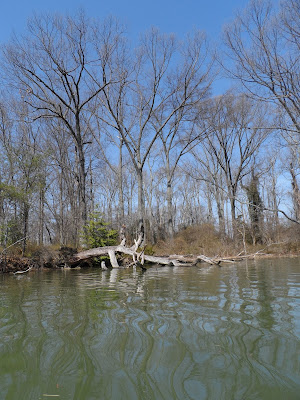 Definitely worth a follow-up visit this summer.

A bit over a week ago I blogged on emergency steering. Since then I've plunged headlong into research for several articles on drogues for steering and storm management. I've got sample from the major players which I've been dragging around the Chesapeake, collecting some baseline data and learning their basic traits. Not under storm conditions, mind you--writing doesn't pay that well!

I've been able to learn about full-size drogues at higher load with 2 tricks. First, pulling them at short scope (actually the best method for emergency steering) gives insight relating to pulling out of a wave face, since a following wave also changes the rode angle. Second, getting a running start at a drogue, hitting it at as much as 7.7 knots (with extended transoms and a clean bottom, that is my best speed) with a non-stretch rode gives some high forces, but I wanted something a little easier to manage and some thing that I could pull continuously at storm-like loading. Like the tandem anchoring trials (coming in 2017 in Practical Sailor), I went to models. 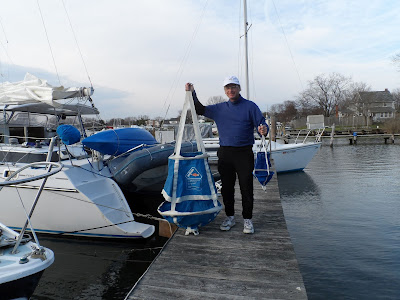 From left to right, 1/3rd scale models of Seabrake 24, Delta Drogue 72, and Jimmy Green Marine 60cm Drogue. Sewn from scrap Sunbrella and 1500-pound bull tape. I saw as much as 200 pounds drag out of the mini Seabrake/Delta combination at 7 knots! I later added a mini-Galerider. 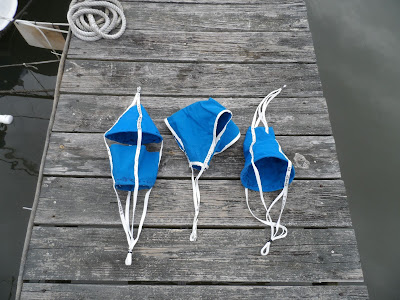 (note. These are NOT official copies and any statements should not be taken as such.)

For anchors, I was able to get roughly 8 inches across, I was able to find 2-pound surrogates in the form of a 2-pound Guardian, 2-pound Claw, and a 2-pound Mantus Dingy Anchor (very nice--get one!). But for drogues I was out of luck. So I sat down with a pile of old canvas, a roll of pulling tape, a palm, scissors and tape measure and made my own. Roughly 8 inches in diameter, if towed by a small diameter rode with mating scale chain, they perform just like their big brothers!
Because they perform to scale, I can accurately predict how larger models will behave, without testing models beyond the capabilities of my boat.

And so now I have a set of tiny scale drogues I can test at scale in small craft advisory conditions, as through it were a gale.

The really weird part is that I have already learned some things I that either the manufacturers don't know or are in denial about. Failure patterns--both mechanical and performance--seem to come from pretty basic errors. Not the better manufacturers, though; they seem to know and communicate better.

I have one article on drogues in Practical Sailor, with more on the way.
Posted by Drew Frye at 5:44 PM No comments:


Extension Ladders—the Rope Climbing Alternative
Say I don’t like the idea of dangling from a finger-thin line the length of which I have not inspected. Of course, I could swap it out, but that still leaves the condition of the pulley in question; I know a guy who decked-out after the pulley axel failed, dropping the rope onto the sharp edge mast cutout, cutting the rope. Obviously I can use multiple back-up lines, but say I just don’t like the idea. I would rather use a ladder because it gives better leverage and is less tiring. (The writer is actually an avid rock and ice climber, with 30 years of active climbing all over the US. He trusts ropes just fine, but prefers the stability and ease of a ladder when practical.)

Is it safe? We seldom observe ladders up masts—unless we are talking about mast steps, which I don’t have and don’t want. Or perhaps the project is installing steps up to the spreaders, and I just can’t see myself working for that long hanging from a string nor making so many trips up and down for bits and pieces. Well, the answer regarding ladder safety is a qualified “yes,” as long as the boat is located in a well protected marina and the ladder well secured. Weekdays are best (fewer wakes).  We’ve used ladders many times, and they remain a favorite, in spite of having racks of climbing gear and no fear of ropes and high places. Sometimes a ladder is simply better. But I take precautions; a safe ladder makes for more efficient work.
·         Not on the hard. While some boats may be blocked well enough for this—multihulls come to mind—it doesn’t matter because yard rules prohibit climbing the mast of a blocked boat. Too much weight up high and too much liability for them. The idea of ladders on the elevated deck of a blocked boat justifiably gives them the willies.


To the spreaders. I don’t like going too much past the spreaders for a number of reasons. On smaller boats—less than 30 feet—the ladder adds weight to an already top-heavy situation. The deck space for the foot is limited resulting in a ladder set at too steep an angle. For larger boats, the required ladder is simply impractical. Extension ladders become progressively more ungainly the longer they become, and a 40-foot extension ladder is a monster for one person to handle, or even for 2 on the deck of a modest boat. A ladder reaching only to the spreaders, on the other hand, can be quite reasonable.

Another reason we like ladders to the spreaders is that it seems most of my work is there, on the forward side of the mast. A ladder gives best access to the steaming light, deck light, lazyjack anchors, flag halyards, spreader boots, and RADAR. On a previous fractionally rigged boat, we could reach halyard exits and shrouds. When climbing with ropes the mast is ascended from behind because the main halyard is used. On the forward side only the spinnaker halyard—if there is one—is available, and often it is suspended from an external block on a crane; the spinnaker halyard is not recommended for this reason. A genoa halyard is available, but you have to lower and clear away the sail. We still use ascenders when we need to go clear to the top, but that is nearly always just an inspection trip, without the repeated up-and-down laps for tools and parts. 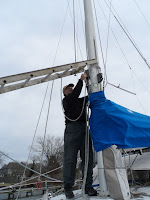 Like many things, safety comes down to being methodical. Secure the ladder in all directions; it should not be able to move, even if you tug hard. Climb carefully, prepared for motion at all times. People do fall from ladders, but seldom those that are properly secured. Be safe. 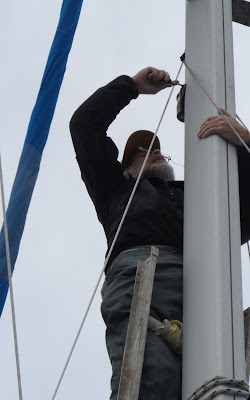 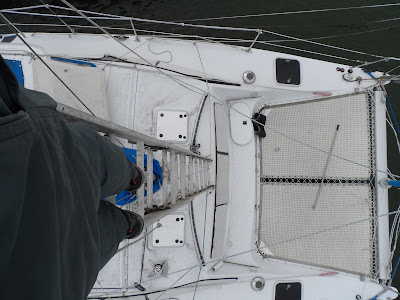 Sometime around Christmas I got lazy about shaving, I decided that I might as well see where that led, and finally I was determined to ignor the interminable annoyance and surprise my daughter with it when she came home on spring break. In that last goal, at least I was a success.

My wife determined it had to be removed in stages and that those sages be recorded, for the amusement of all. 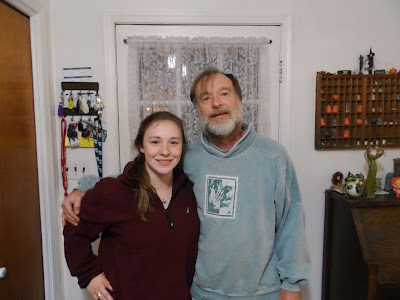 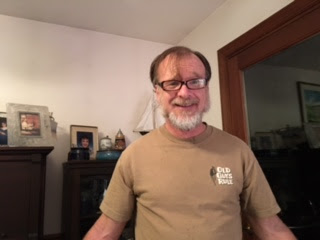 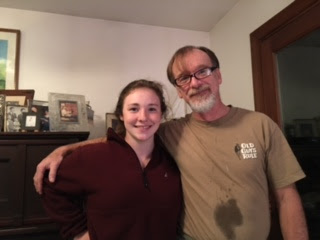 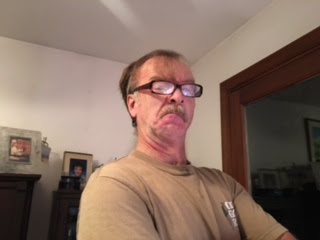 And once the mustache came off, I felt clean for the first time in months.