My daughters Perception Impulse got me hooked on marsh exploration and paddling, but I discovered
2 problems:
I've hunted high and low (a Practical Sailor article on kayaks for the sailor is probably in the works), rented or borrowed many kayaks, and picked up a Wilderness Systems Aspire 105 yesterday. A hibred kayak, it features some of the shape of a whitewater boat (increased fore/aft rocker and limited keel) to allow quicker turns and to reduce the tendency of the current to grab the ends and spin you around. The thigh braces are better, and the seat has more adjustments to help hold the paddler in place; still, the seat is too wide and the boat too stable for effective edging, and there area pair of groves in the bottom that tend to grab water when side-slipping.  On the rec side it has a larger cockpit and storage more typical of sea kayaks. To provide straight tracking on flat water, it has a retractable skeg near the transom, yet angled and far enough in to prevent damage. Though it cannot be Eskimo rolled, the increase volume forward makes it easy to reboard after capsize. I tested that theory after neglecting to edge correctly pealing out of an eddy; it seemed so stable, but that big chine can sure catch water. It was a simple matter to flip it back over quickly, scooping only a little water, flop up on the bow, and slide myself back, all the while in fast moving but relatively flat water. The big cockpit opening makes reentry easy.

Basically, an upgraded recreational kayak with a few features to make it more at home in moving water.


Just north of Widewater on the C & O Canal. I had to special order a different color; I just couldn't see bight orange in a wilderness setting. 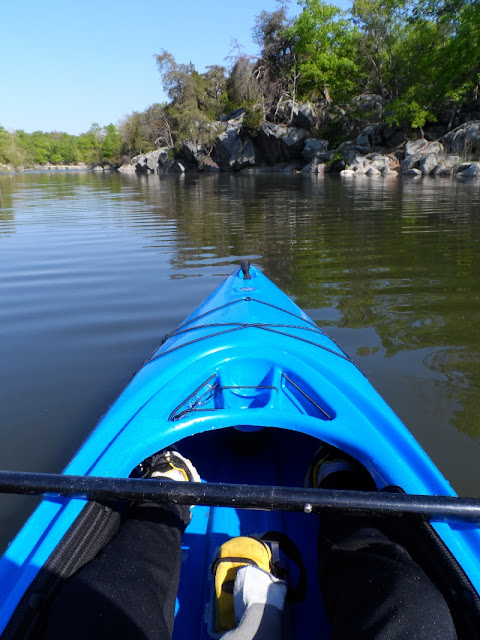 How do I like her? My first forays into whitewater assured me that she is more capable than I am at this point. On flat water, it seemed faster and the seat is a big improvement. If I were buying a boat strictly for sailing, I still like the Impulse; it's simpler and lighter. But for longer days, further afield, and more variety, the Aspire seems a good choice. It may prove the optimum choice for running long stretches of flat and moving river and for the occasional rough day on the Chesapeake.

Update 5-5-2013. Jessica and I took the Aspire and Impulse out on the open Chesapeake just as a small craft advisory had lifted; still a bit bumpy, and the water is still only 13C. Lots of laughs and relaxing too. The lessons:


On the Potomac above Old Anglers Inn. I was surprised to be able to catch this while on moving water. Credit to image stabilization and a stable kayak. He was several hundred yards away. 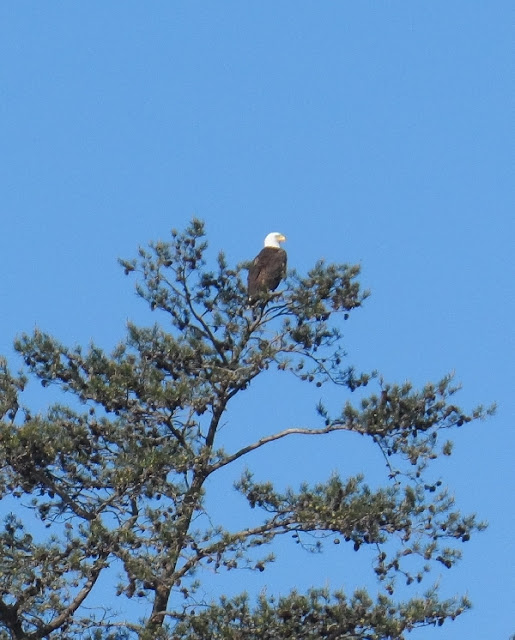 Update: June 2016 I noticed that the water tight bulkhead separating the stern compartment had started to leak, either the result of rough treatment in white water, or perhaps the result of dropping dropping down onto the seat. It was easily repaired with polyurethane caulk--Locktite PL S30(NOT silicone).

The skeg has also developed some severe cracks, though it still works.

I made a cockpit cover from some scraps of Sunbrella. Helps keep it dry and keeps the UV off the seat, the most vulnerable part (I keep it on the boat, on its side, all year).

Many marinas are coming out with new rules for DIY projects. OFten the boat owners gripe, but to me, these rules are very reasonable. The below is from a Chesapeake Bay marina. My thoughts are added and underscored.
"Please remember to inform the office of bottom paint applied. We need the date applied, manufacturer, type and quantity applied. Management must log paint applied on a daily basis and report to the state monthly."

This all seems very reasonable to me. Most requirements are simply restating MD DNR regulations. The last line is intrusive, but as we will see, is logical for the marina.

Why do they need to know the type of paint? Maryland has passed a law that will restrict the VOC levels of paints applied, and marinas are only allotted a certain amount of non-compliant applications. Compliant paints contain less than 400g/liter VOCs.

Because they need to calculate the amount of emissions from paints that contain VOCs over the MD limit. You can get this off the MSDS or tech sheet. I found the paints I have used--I checked several and they were all traditional high-Cu solvent paints-- contain less than the mandated 3.3 pounds/gallon, so no problem. You DO NOT have to go to water-based paints, not in MD. Anything less than 400g/L will pass.

This e-mail has no impact on me, as I always did bottom painting this way. They are just asking us to be clean.
And finally, use a 2-year paint. Just my opinion. But if I do the work only 50% as often as and annual practice, it just stands to reason the impact is less. Anytime you can benefit the environment, save money, and save work.... Well, the smart choice is just plain obvious.