"A Bathroom Fan": or "No Blog Could be Complete Without a Tale of Head Repairs"

Well, as much as I enjoy fiddling with engineering solutions for my sailboat, I could go a lifetime without providing basic services and solutions in the head area. It simply didn't work out that way. 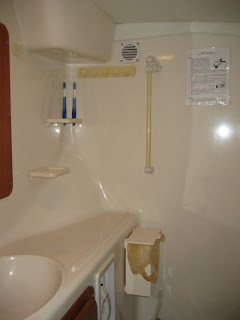 When I bought the boat the head worked fine. Actually, it was well below freezing during the pre-purchase survey and all of the water systems were winterized. However, we used the head throughout the winter and spring and never had any difficulty with it. Tip: flush with a very weak solution of antifreeze and you won't have to worry about freezing anything. Gradually - I tried very hard to ignore this gradual development - we started to notice a wee little bit of back-flow. Eventually it became whole lot of back-flow. No matter how you flushed, eventually something that no guests wish to speak of would find its way back into the bowl. Each user, of course, assumed that a prior user had either been hasty or just lazy about reading or practicing instructions. In reality, the joker valve had worn a bit, allowing some back-flow from a holding tank. I have no idea from whence the term "joker valve" derived. It is what engineers refer to as a duckbill valve, a piece of rubber so designed that wastes can flow from the inside out, but then closes tight against the back flow. Because they can seal around debris, they are commonly used in wastewater lines and storm water lines, particularly those that discharged into tidal waters - they prevent a rising or flood tide from backing up the sewer. I digress.

One nice thing about the PDQ is that the head compartment is also a molded shower stall, and so everything - I won't go into details - is easily hosed down the drain. Replacing the valve is a five-minute 2-screw task; just not the most pleasant five minutes you've ever spent. But that was the problem and the major source of stink was thus terminated. By the way, my friends an I have durability tested all of the major brands (it turns out that many are 100% interchangable in Jabsco Manual Heads) over the past 5 years and determined that the Raritan PH-II valves outlast all others by 3:1. You should get 2-4 years instead of 1-2. $21.50.

Still, a head will never be fresh as a flower. Space on the boat is necessarily tight - at least with my budget - and a little positive ventilation would be a good thing. The boat does have a number of solar powered ventilators; unfortunately they all pull the air from the bathroom through the cabin, and out through the aft cabins. A bathroom fan seemed like a good idea, but I did not wish to cut another hole in the deck.

The solution was simple; the compartment behind the toilet contains only the holding tank and a hot water heater, and it already has a solar powered ventilator. All I needed to do was provide a small fan and louvered opening that would convey the bathroom stink into this compartment where it would do no harm and would be exhausted. Yes, I have all sanitary rated fittings and hose, but for a small compartment dominated by a holding tank you must have realistic expectations. It isn't bad at all, but I would serve tea there either. I once read of a sailor that had a spare berth in that compartment - for the himself, the captain, he explained. Oh, my.

The vent louver is from Sea Dog, a 3-inch diameter, flush-mount, ABS round vent available for $2.99 from Defender Marine. The fan is from Radio Shack, $17, a 3-inch diameter 12 V computer fan. By some incredibly lucky quirk of fate, the 4 mounting bolts for the louver and the fan are exactly the same, both in diameter and spacing. Is a computer fan suitable for a damp environment? I have used these Radio Shack fans to draft compost bio-filters on animal enclosures, a similar duty, and they typically live through about 4 years of continuous duty. That is right up there with "marine" products. Using a 3 1/4-inch hole saw to pop a hole in the bulkhead and four #8 x 2-inch flat head machine screws, both the louver and a fan were mounted in minutes. Well, not quite that simple; the box for the louver will tell you you need a slightly smaller diameter hole saw, which is not true, and in fact even with the 3 1/4-inch saw I had to work it at some odd angles to make the just a little bit larger than 3 1/4 inches, perhaps 3 3/8 inches. Not a big deal, just measure carefully. 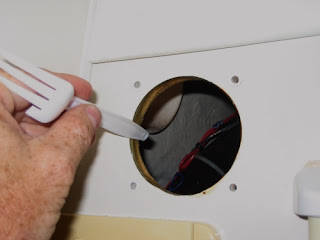 The head bulkhead is FRP with a balsa core, so it is a good idea remove a little core and seal the edges with epoxy, just in case. This is far above the waterline and on the interior, but it is a shower compartment, so it's better play it safe.

Should you desire to duct the fan through a hose, the same louver is available with a hose barb. You could simply cut out the louvers, add it to the discharge side of the fan using 1/4-inch longer screws and be in business. 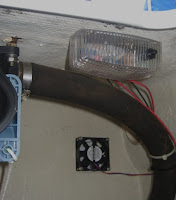 While I was pulling wire, I elected to add a small light in the holding tank compartment. Fishing poles are stored in there, and it is also home to all of the through-hull fittings; a light is useful. I picked up a cheap pick-up truck bed work light with an integral switch from Advance Auto Parts (~ $7) - not marine perhaps, but I had used the same light on a previous boat as an under-boom light and it held up very well. Since this is a very dry location I am not concerned. Others have used automotive back-up lights in damp locations with success; I am not certain how they would be on deck with salt spray, but inside lockers with a little grease on the terminals they should do very well.

A few notes on marine wiring, for the uninitiated:
* Turn all of the power off and make sure to check that this is true with a multi-meter. It may only be 12 volts but there's a lot of amps available, particularly when you are tapping into the main panel.
* Use the same multimeter to be certain you know where the ground is and where the hot side is. Don't be casual about fusing; it even easier to get overheated circuit 12 volt applications as it is in a household. Make sure you are not on the 120 volt side.

If all of the above is not obvious, read a book on 12 volt marine electrical wiring. It's straightforward, but deserves study. Marine practice and automotive practice are a little bit different. I've left much out.