Stitching and Chafe--Not All that Vulnerable

I've been busy testing coverings and coatings, certain that stitiched eye needed consierdaerable protection. But then I started test the eyes themselves. First I sewed a pair of eye in 3/8" Samson XLS, both with the stitch count limited to break at about 2500 pounds. I could sew a stronger eye, but stitich strength is easier to measure accurately when you are not too close to the line breaking strength (stitch/rope interaction become important beyond ~ 60% BS). 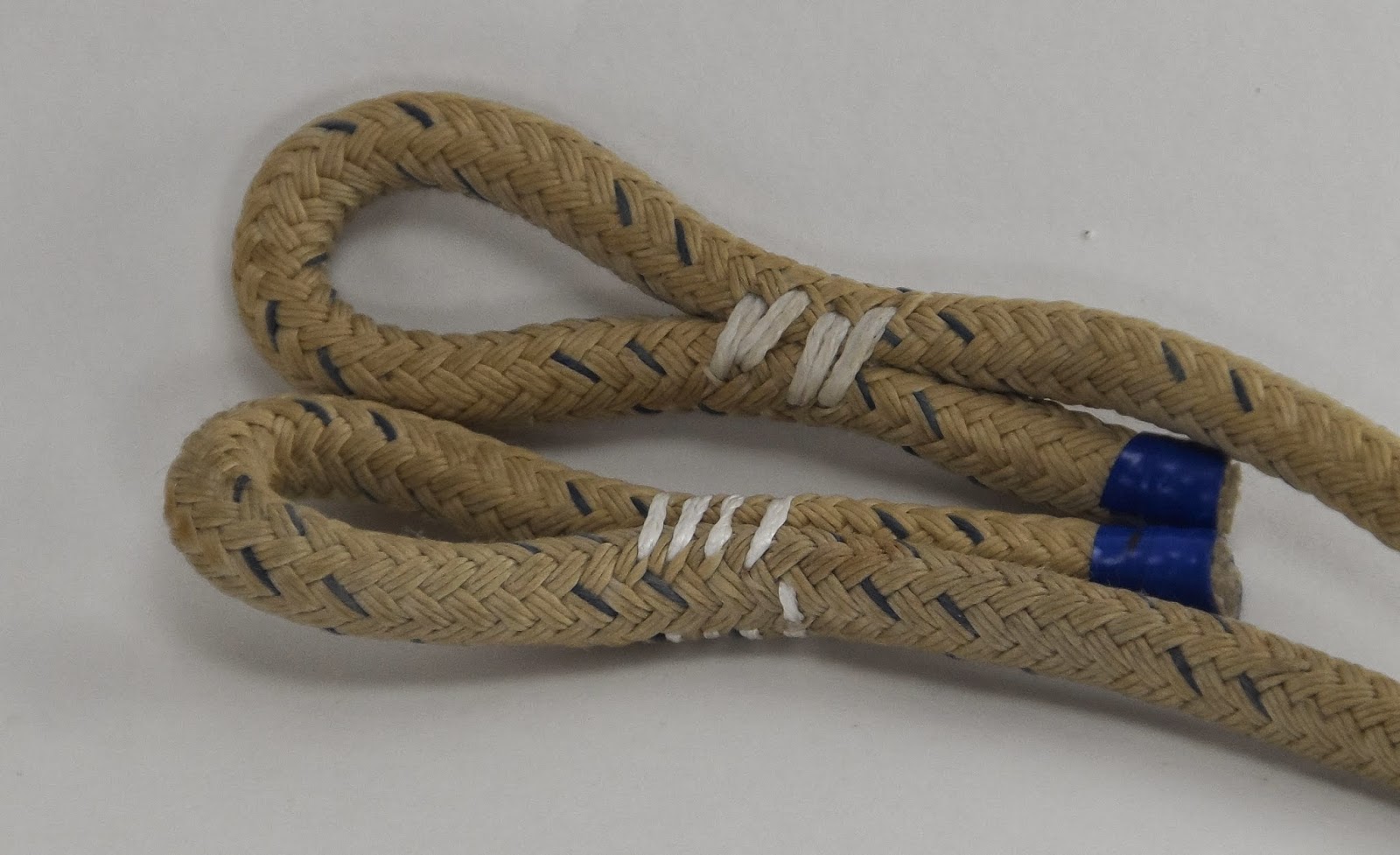 Then I abraded each on fresh-sawn yellow pine for 20 minutes on my abrasion machine.  This is just long enough to wear through the line cover, as can be seen.


The polyester stitching is worn (74% of original strength when pulled to failure), but so much as the cover, which is just into the core.

The Dyneema twine suffered no measurable wear (failed at calculated value). However, the cover is gone below the splice, and considerably scuffed where the Dyneema twine did not protect it.

It seems the polyester whipping twine is a more abrasion resistant weave than the cover of the line. Perhaps the wax helps. So while I will still cover my sewn eyes to protect them from UV and wear, I far less concerned than I was. I also need to rethink Dyneema twine; For reasons of stretch,  polyester will remain the choice for nylon webbing and line, but for polyester and Deneema line... I need to do a little more testing. Polyester makes slightly stronger constructions, but perhaps not in the long run. The jury is out.

Conclusion: polyester twine was basically as durable as the line, and the Dyneema considerably more so. Interesting.

As for UV, the damage is more uniform that we think. This splice is cover only, but the line broke elsewhere. 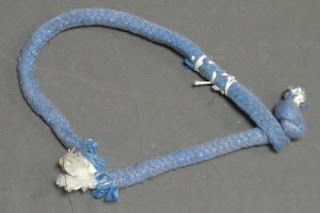 I've been investigating chafe protection and Amsteel as it relates to lifeline replacement. Certainly, wire cable is the gold standard. But now I'm not so sure....

After an hour of sawing back-and-forth through a 10mm hole in SS tubing, it had eaten a nice grove and built a corresponding burr on the inside: 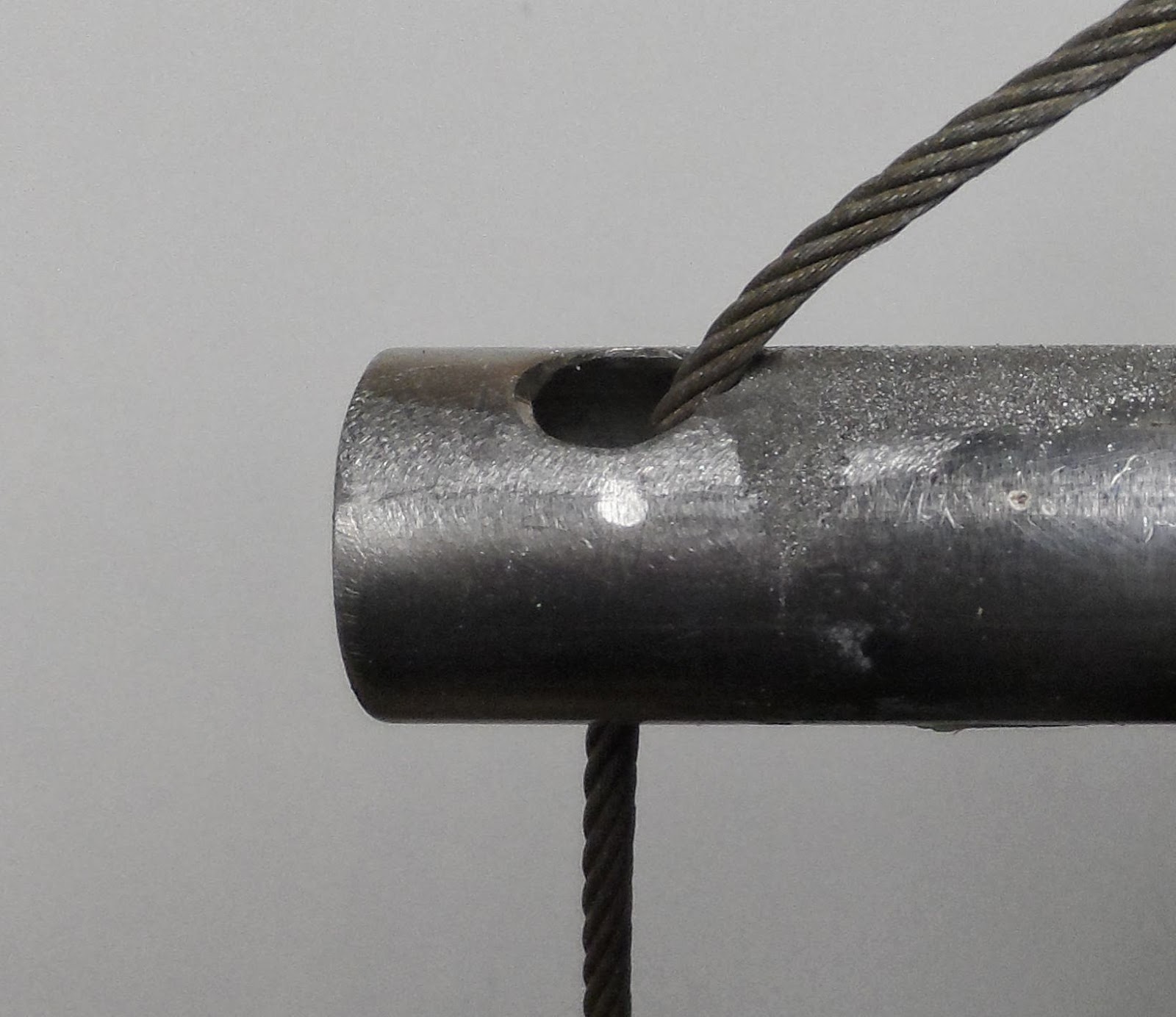 And though the wire did not look very worn, when we flexed just a bit there was a different story....


Also 1 hour. The damage was not apparent until flexed. Most of the broken wires were inside. 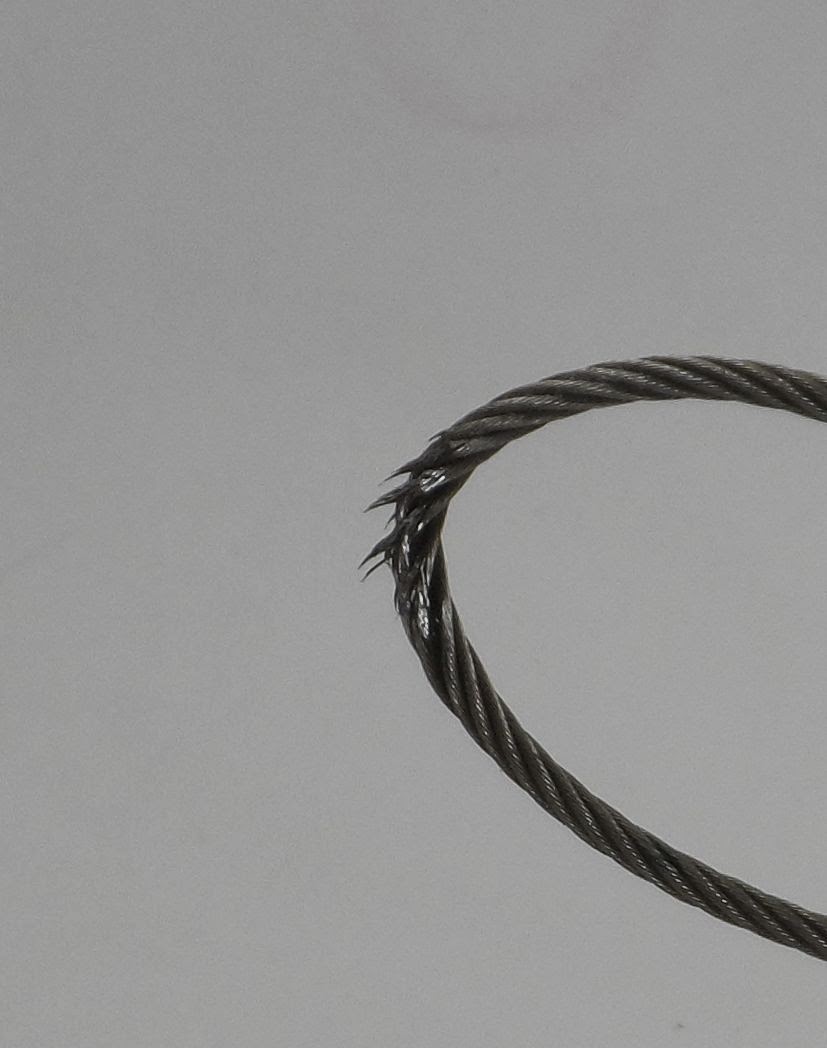 How did Amsteel fare, in the same hole? Before the wire created the burr? Much better with very little wear in an hour. Afterwards, no as well, but still the damage was little more serious than that to the stainless cable. Given that I plan to use 1/4 Amsteel, which is nearly twice as strong as the cable to start with, I'm feeling OK. 1/4-inch it is sufficiently strong that even after 10 years in the Chesapeake sun (not so strong as the desert southwest or tropics) it should have equivalent strength, and with proper chafe guards, the strength loss in the holes should be less than wire. Protected from the son, the pass-troughs may be the strongest part by then.

How does Amsteel like the new hole? Not so bad as you might think and about the same as it like the raw hole, just after I drilled it without deburring. By way of comparison, after the hole was deburred it showed ~ 1/3 this much wear, and if coated with Spinlock RP25, no wear after 2 hours (840 cycles).


After 1 hour on the wire cable gouged hole. About the same as a raw drilled hole, yet much worse than a polished hole. 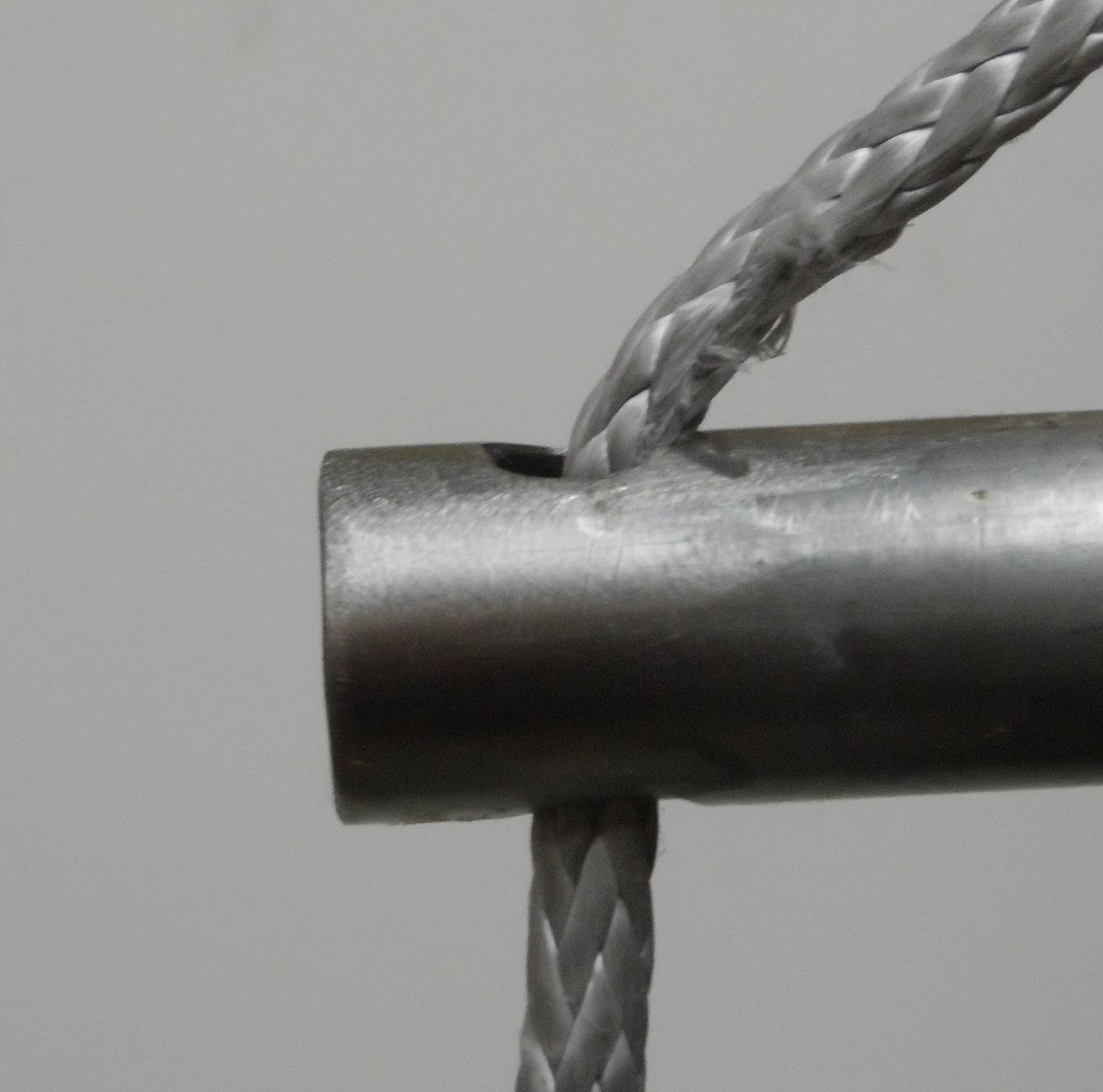 Alternatively, I tried a dyneema anti-chafe sleeve floating for 3 hours. It could have run for 100 hours without showing wear. 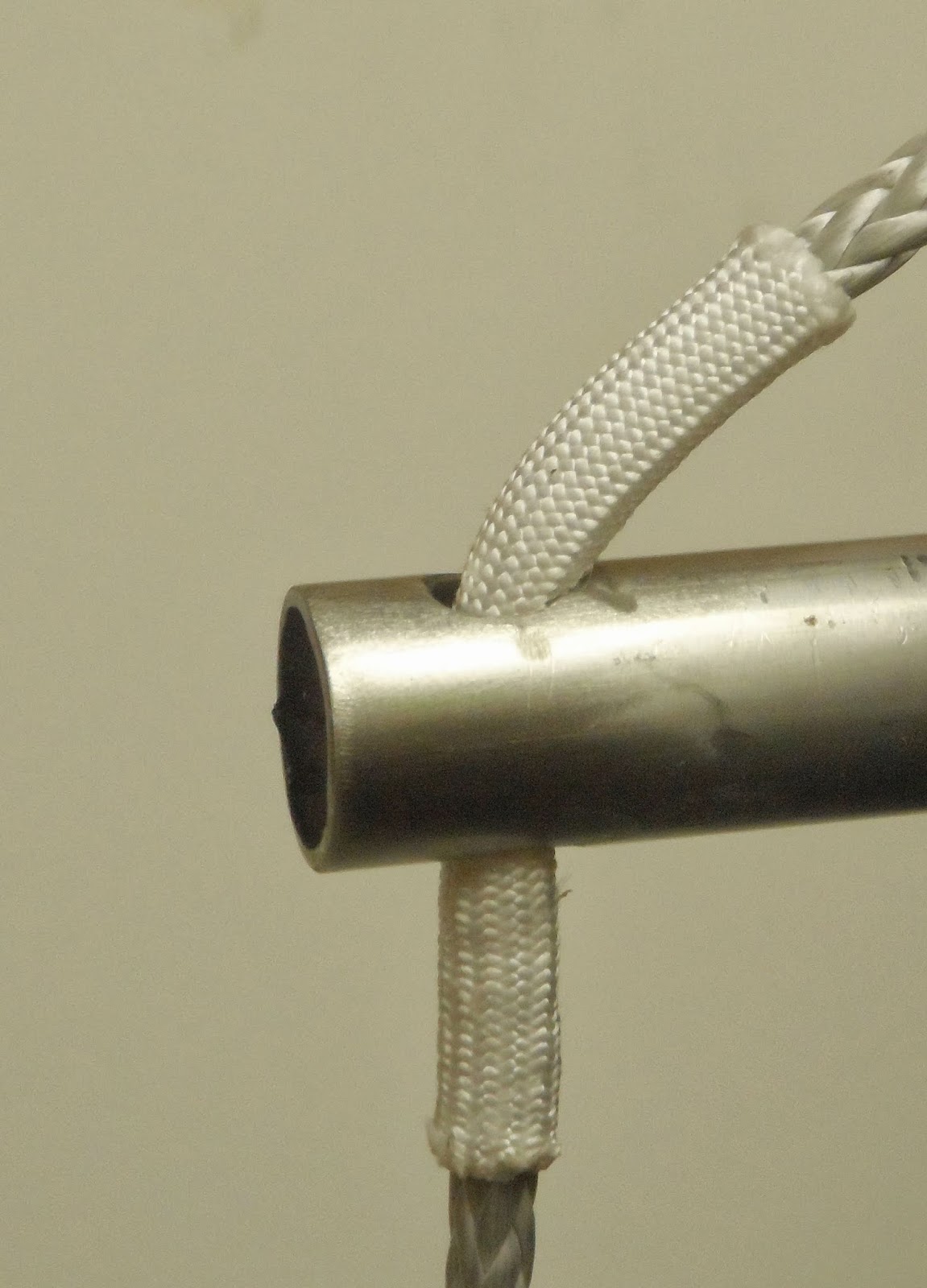 By way of comparison, this hole wore a polyester line through the cover in 20 seconds and in half in 5 minutes. Amsteel is tough stuff.


No chafe protection? This is the stanchion... 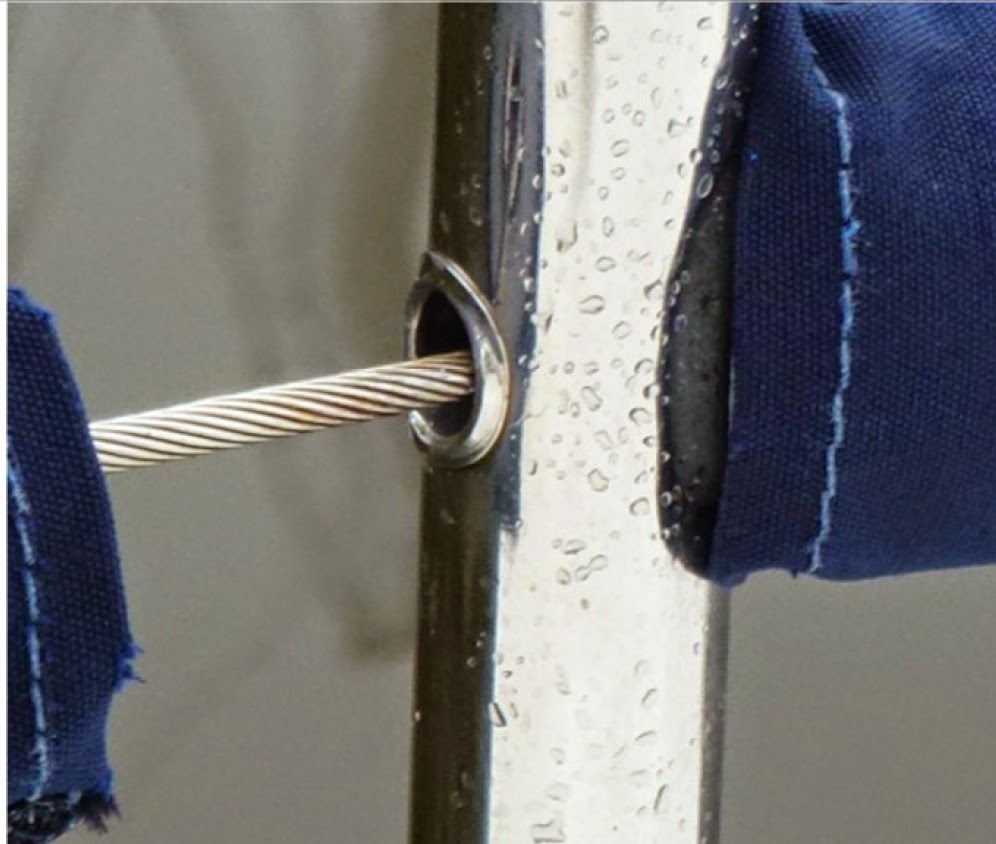 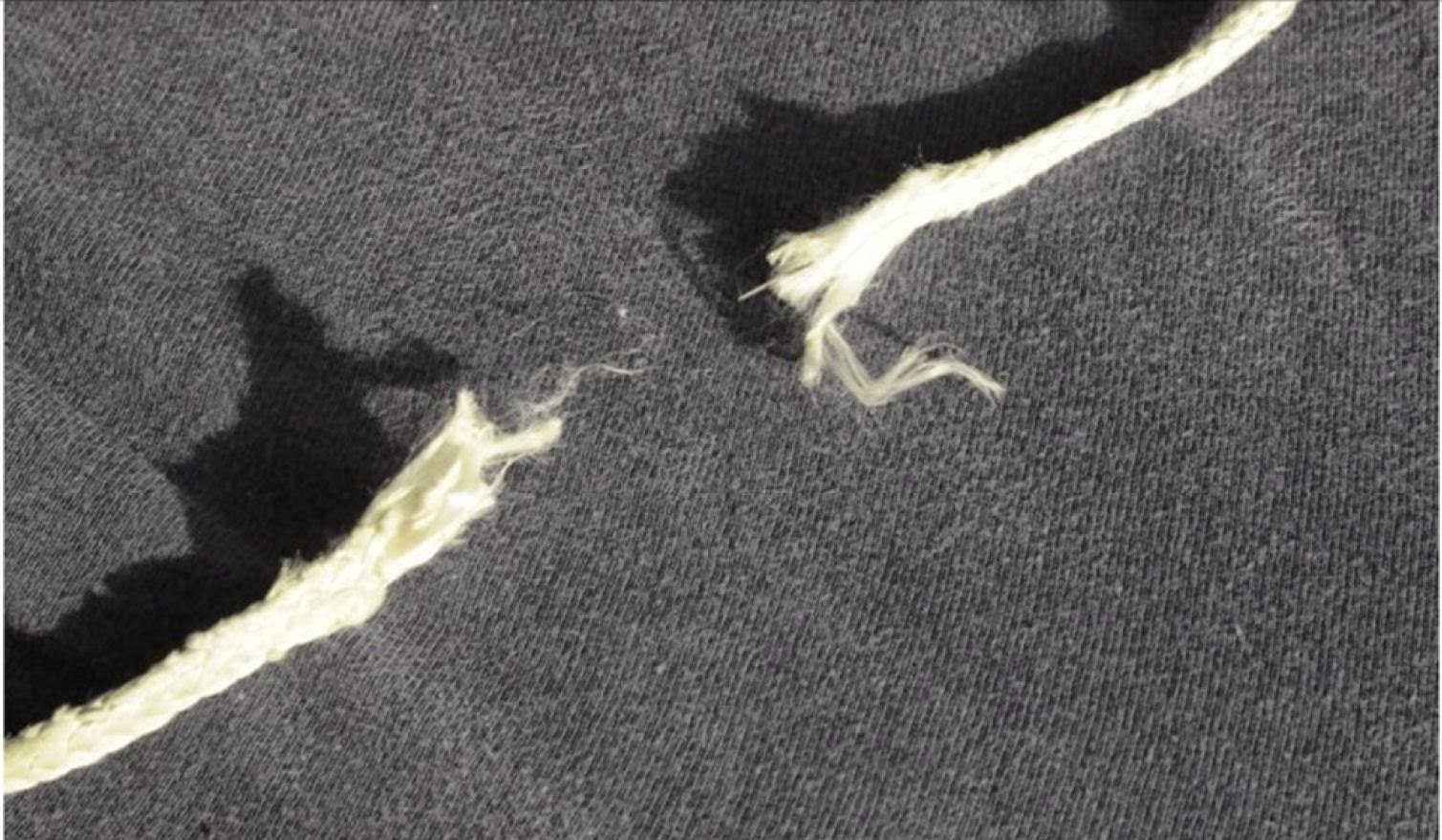