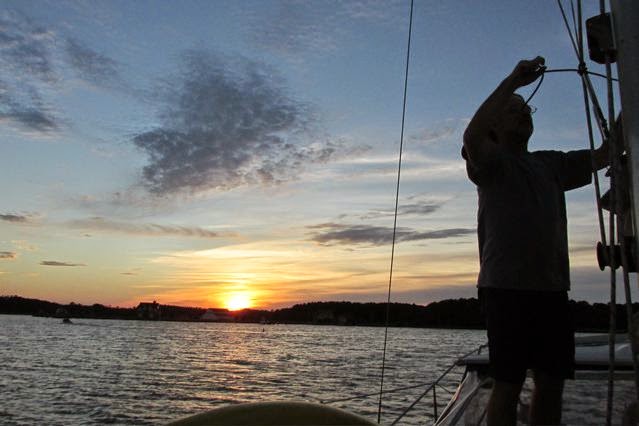 Tying up a halyard so it doesn't slap.
Posted by Drew Frye at 4:18 PM No comments:

My blog, my opinions. Some I can support, but I don't need to. I love a good rant.

When I started my career 30 years ago, my supervisor was a hard working man with only a few business classes. He did very well for himself, using hustle and dependable common sense to drive our business to more dependable success than our generally better educated and better financed competitors. After assigning a particularly thankless job to a laborer or contractor, or after watching some failure of common sense, he often proclaimed that he was "glad he paid attention in school." In fact he was very well educated by the school of careful observation. The primary reason I can pass practically every sailboat I meet--there aren't too many racers in the area, but there are certainly many much larger cruising boats--is because I pay attention. To me, that art and science of converting wind into motion is much or what makes sailing worthwhile.

My rules of boat speed.

Good Sails. Obviously important going to the weather (doesn't really matter off the wind), but if you can't afford or justify new canvass...
Practice

Engine. No I will NOT suggest power is the best way to windward. A car is much faster.
Fear of Spinnakers
Boats with better trim go faster with less heel, are lighter on the tiller, track straighter, and handle better and more safely when things kick up. Learning to sail a boat to the limits of its capabilities is key when lee shores and capsize threaten. A faster sailor can be a safer sailor.

I don't always care about speed. Some days I'll just drift around, not much caring. That's good too. 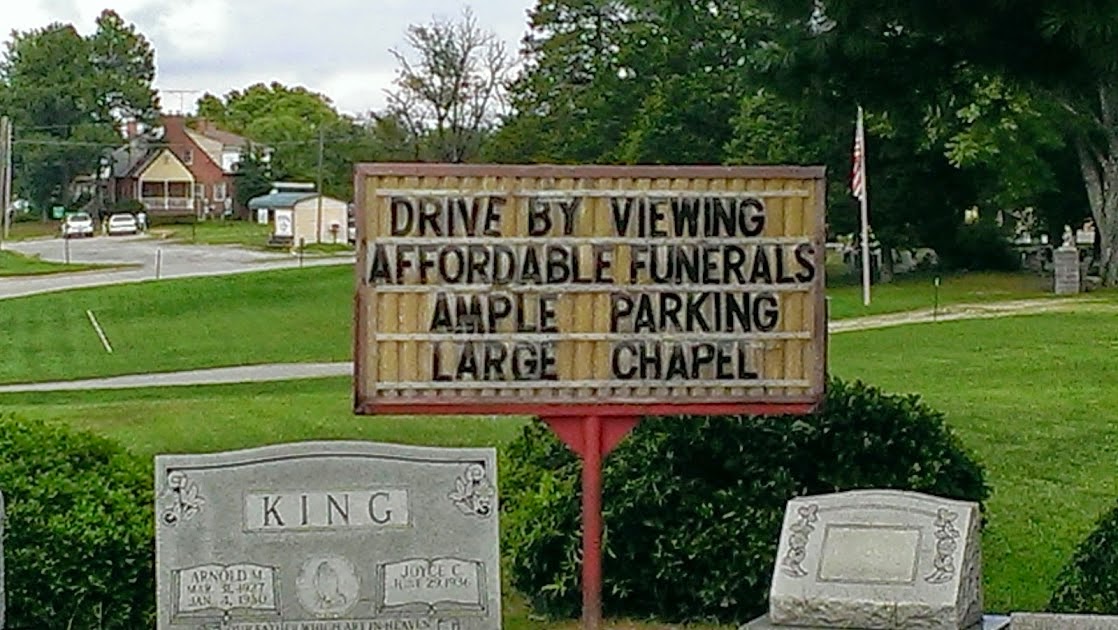 There is a large bay window in the side of the building to facilitate viewing. It's a small town, so perhaps folks "drive through" just to see if it's someone they know.

My favorite wetland kayaking destination, this trip the goal was to introduce my wife to the quiet maze that is The Broads of Slaughter Creek. Part of the Taylor's Island Wildlife Refuge, it combines with the Blackwater refuge to form one of the largest natural areas on the east coast, and certainly one of the largest contiguous marshes. I've posted more on the area here. 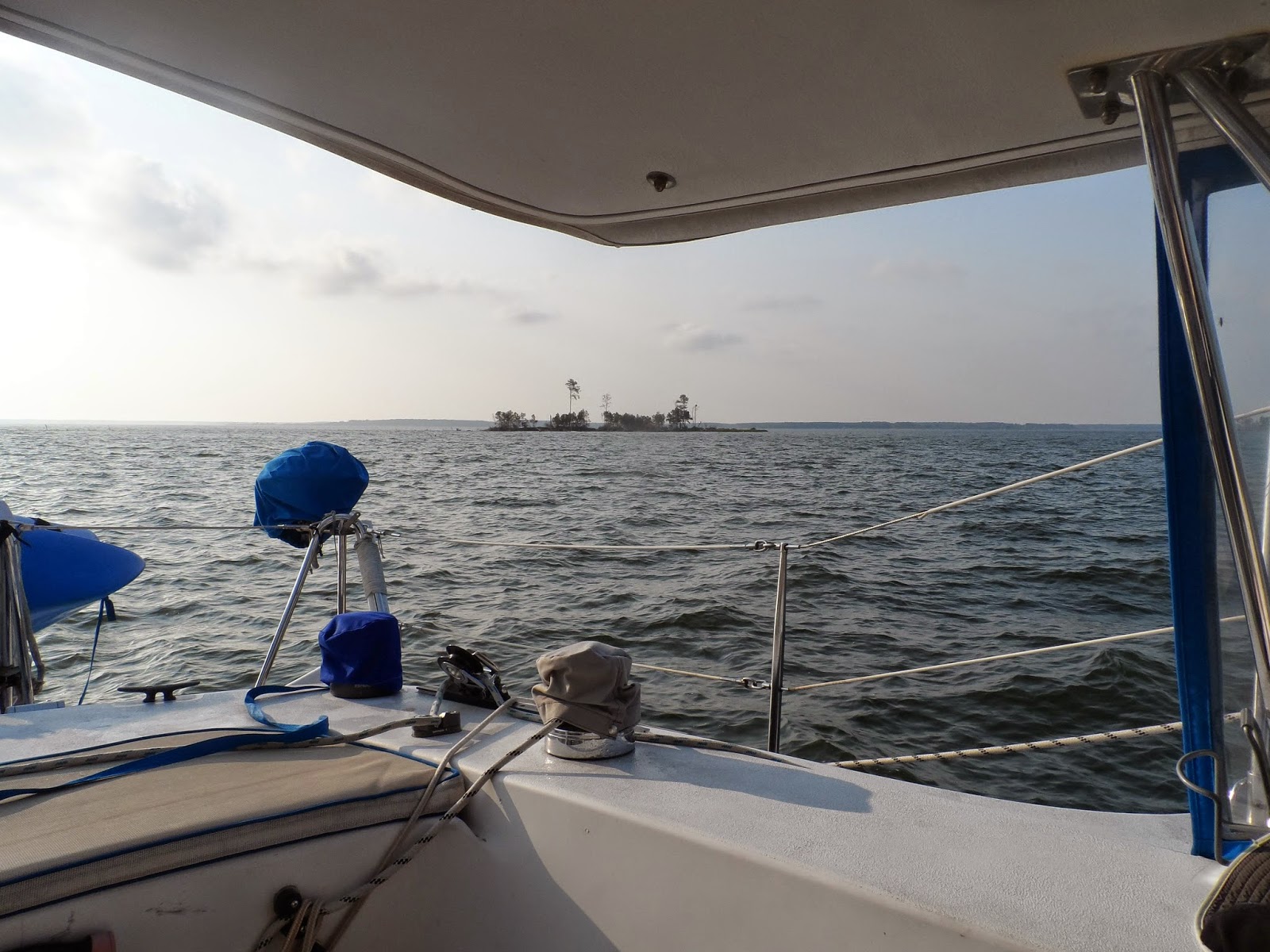 We used the tender to tow our kayaks deep into the maze. My wife was first to spot the circling bald eagles (3 at one sighting!) and later, a periwinkle fight (sort of like Battleship, waged over the top of a small humacks from kayaks) between me and my daughter. I think the bald eagles were the highlight.

A quiet night on the hook. I've come to like the Mantus chain hook; the new plastic keeper makes it a fast one-hand operation with absolute security. In fact, I'm still using the 3-D printed prototype Mantus sent me for testing.

Fishing. After several hours of unproductive trolling, I caught a nice snapper blue while I was reeling in. A nice surprise. A bit of a jolt when you are sure that you are winding in slack line... but then again, that has happened to me several times; I'm reeling in, done fishing, only to get smacked by a 20-pound rockfish when I least expect it.


Not a trophy, but in truth, the small ones taste best. Perfect size for the pan. 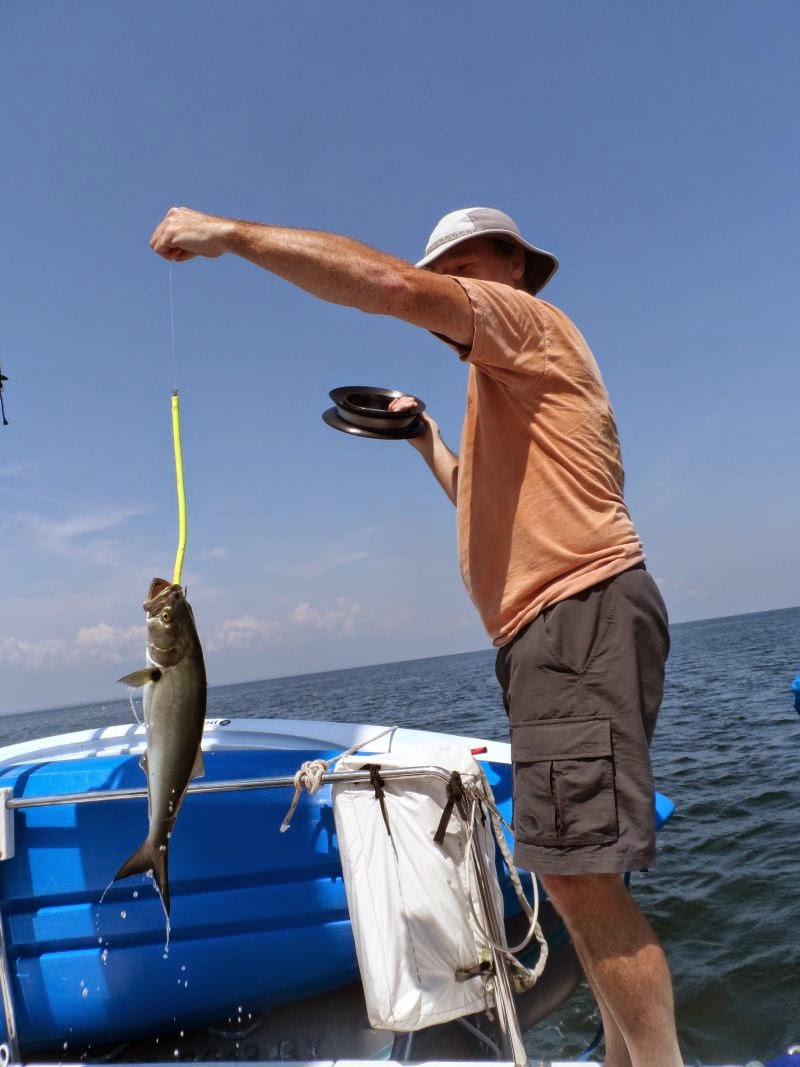 Eating. The highlight of Smith Island may be the crab cakes at Ruke's. No exaggeration, and without any reservation, they are the finest anywhere, including 5-star restaurants. They simply melt in your mouth, exploding with flavor. Wish I knew the secret, though I suspect minimal filler (they tend to fall apart) and very fresh crabs are key. Worth the trip, just for that. 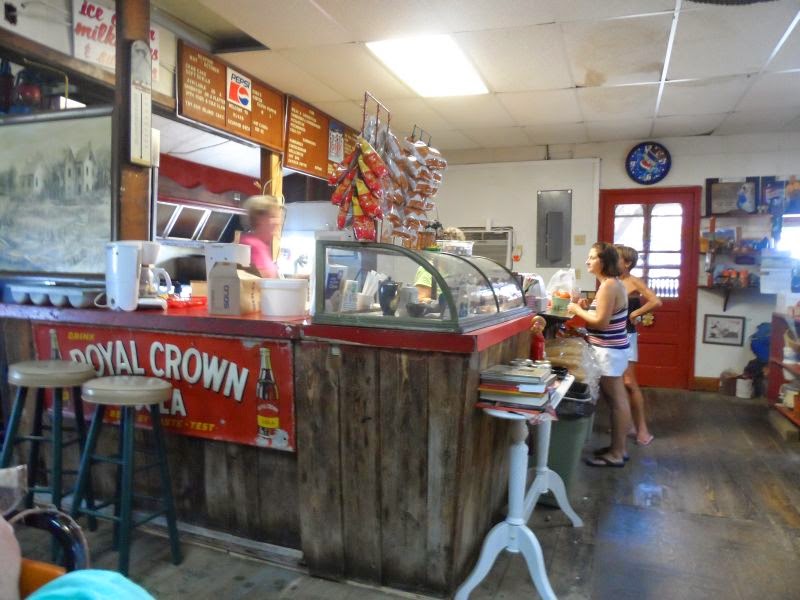 Kayaking. You could spend a week exploring the Smith Island complex and never see most of it. We spent 2 nights and enjoyed as what as we could, paddling different areas than those we have explored before. Swan island is nice, just north of the western entrance channel. There is also a dredge spoil island on the south side of the western entrance that is home to thousands of gulls. Goat island --just across the harbor--is filled with feral goats.


Goat Island. There are perhaps 40 on the island, always climbing trees, for instinctual reasons, we suppose. 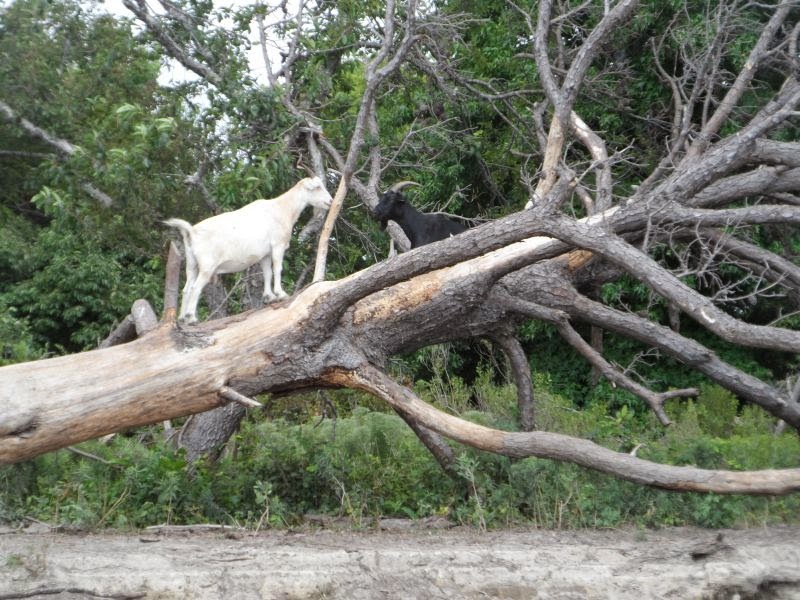 Can't let a jetty stop you. Up and over. 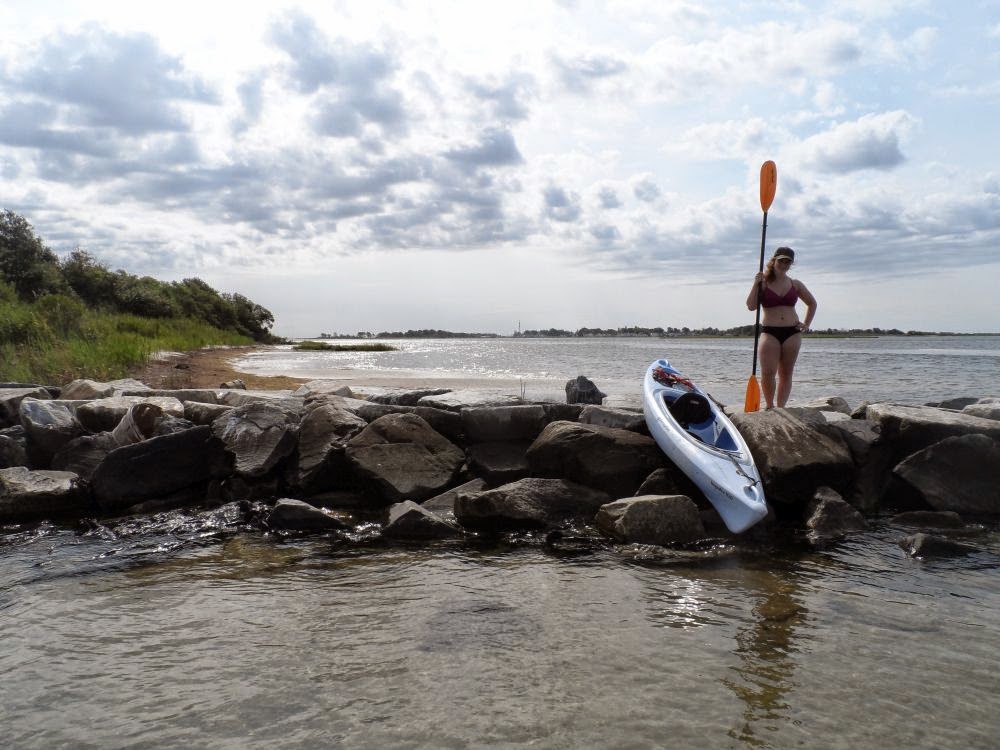 Impossibly low freeboard on the flats boats. Much of the crabbing and clamming water is very thin. 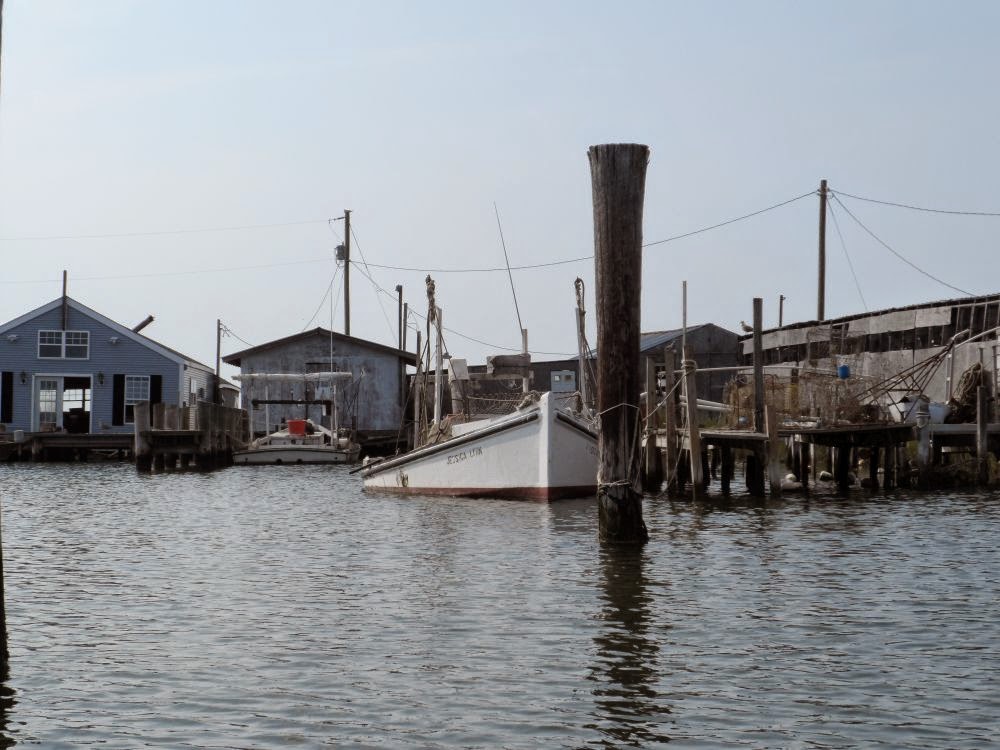 They say you should name the boat for your daughter rather than your wife, since the former is a permanent relationship, the later less certain. I'm guessing this was named for the daughter. 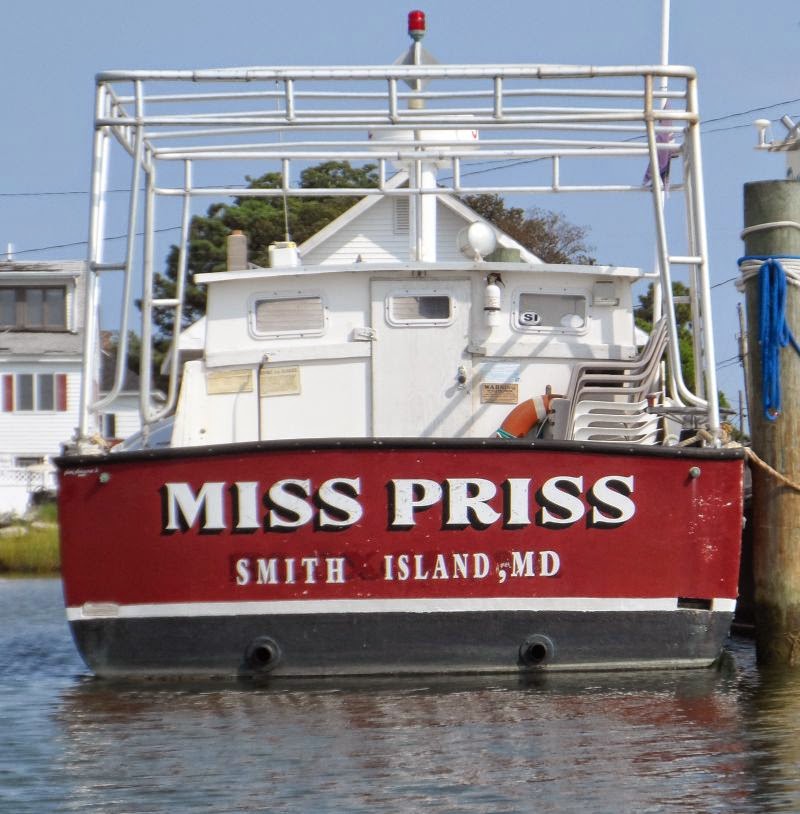 Found this on the beach. After a little research we determined it is a Loggerhead sea turtle rib. Though I've never seen a live one in Chesapeake or nearby coastal waters, we've found eggs and carapaces. They are threatened, but not truly rare. 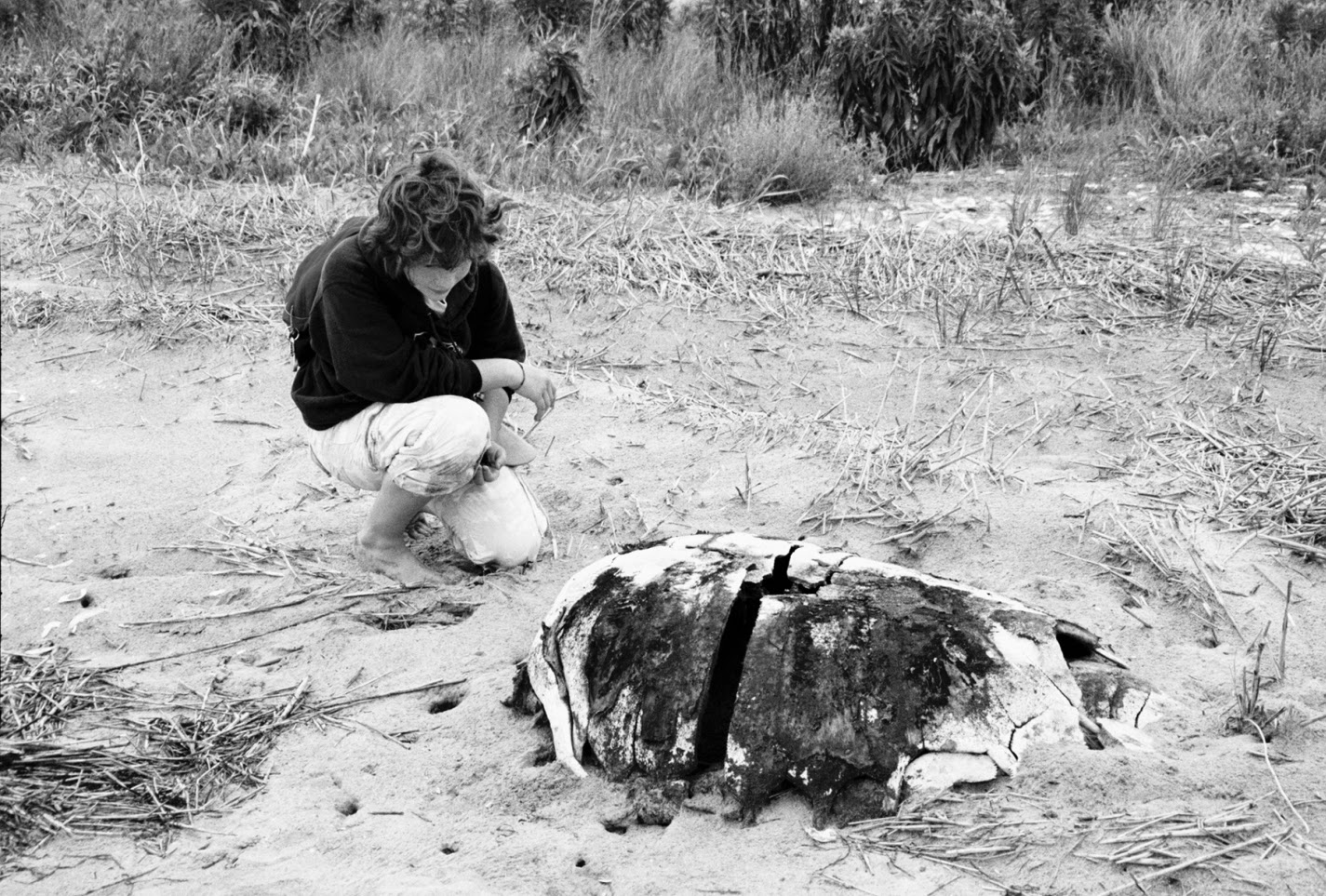 Tacks included, perhaps 20 miles of bashing into steep chop and 20 knots winds. Tacking though 100 degrees, boat speed cycled between 8.5 knots on the flat bits and 5 knots when the beam buried in a steep set, sending green water all the way to the cockpit, averaging 6.7 knots dock-to-dock, including time spent untangling a crab pot from the rudder--hard to see those buggers in the conditions.


More fishing. I think the cats got most of the minnows. 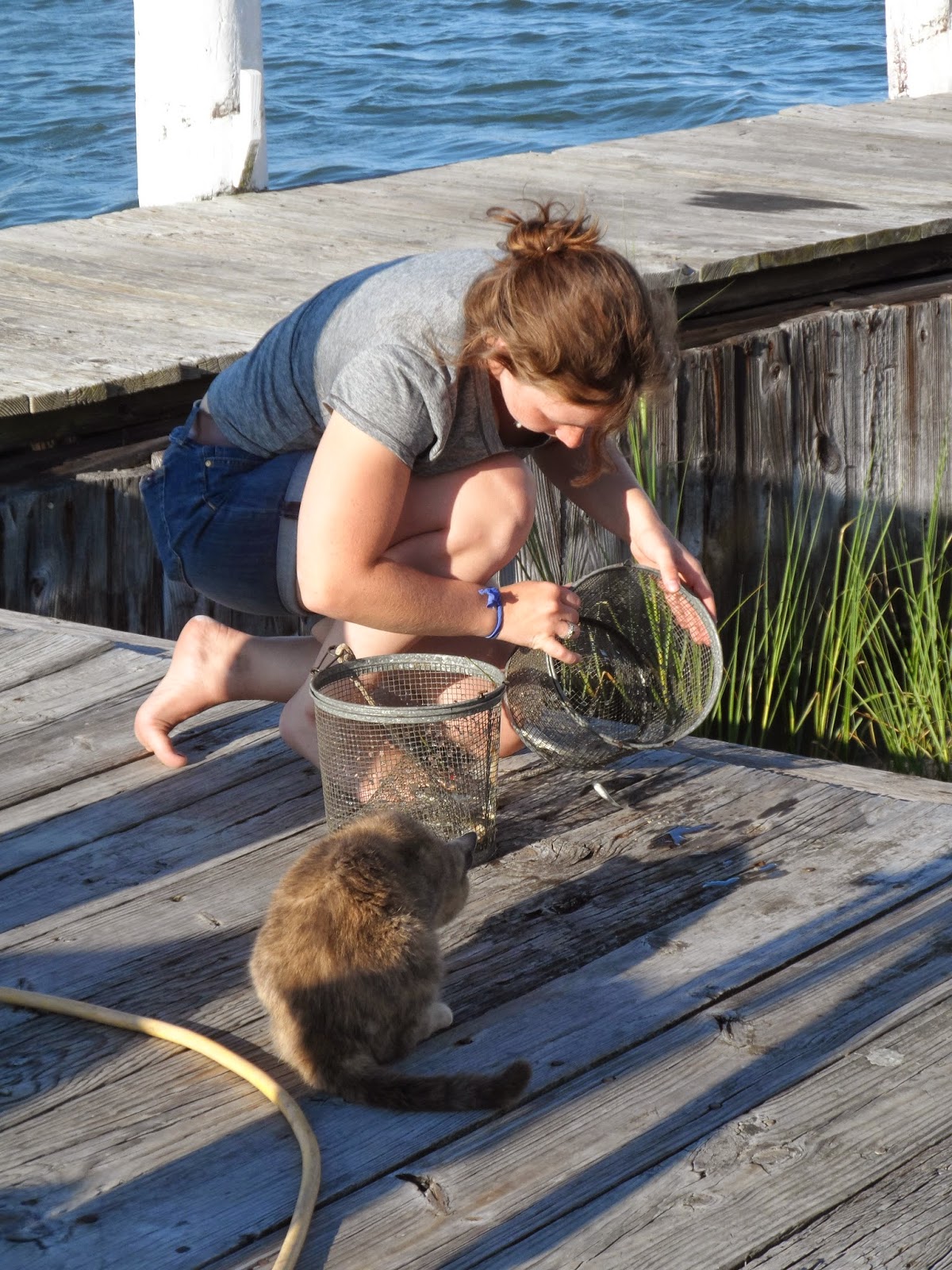 One of our favorite places for just doing nothing, we still manage to keep busy.

The claws aren't much of the threat when they're soft. 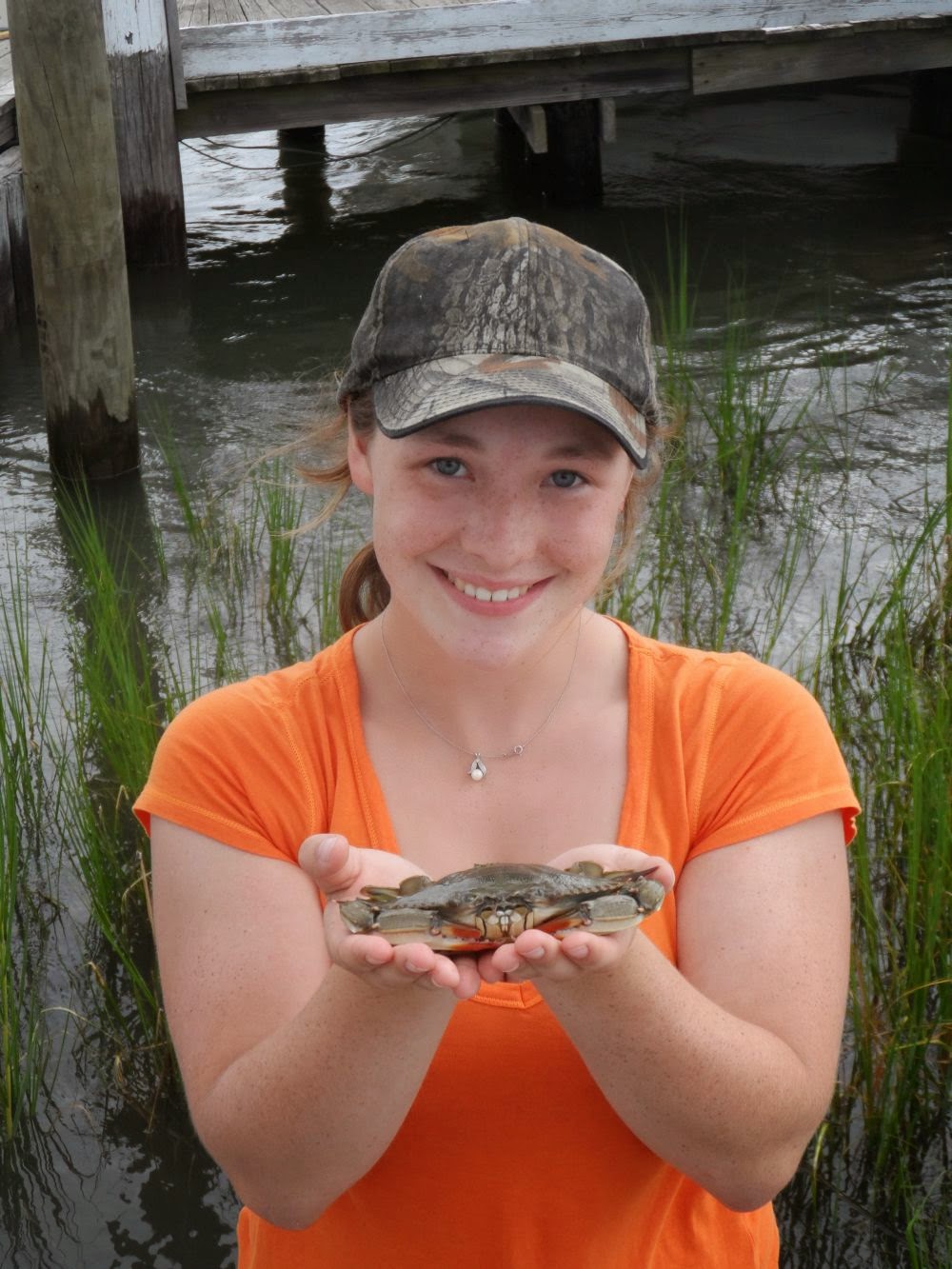 The Homecoming Festival sets up on the airport flight line, a short walk from the marina. The whole town is there, often more than 200 golf carts! Sure, as a visitor you are not a part of the family, but that doesn't matter. $5 admission and good music.

Uneventful light air sailing. Caught 2 more snapper blues on the way, which added to the interest.

The Tiki Bar is the local muscle boat hang-out, worth a few minutes just for the people watching and the music. Anchor further away, though, up mill creek. Be aware of the cable area.

More uneventful light air sailing. An hour was spent on the beach at Calvert Cliffs, collecting fossils and enjoying the quiet, before the hikers reach the beach.

Most of the meat in the fridge returned home with us; out catch matched our appetite, and some fish were distributed to my parents. We went out for steak that first night home, having reached our fill of seafood, at least for a time.

(I borrowed some of this from Windborne. It seemed important to share.)

I'm all about eco. I work for one of the largest recyclers, have built multiple re-cycling and recovery plants, and have invented new processes. But I'm not in favor of mis-labling or eco products that don't meet specifications or perform.


This is NOT mineral spirits. 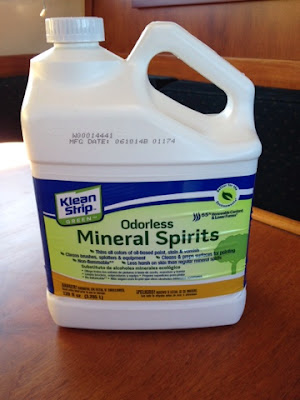 This is an emulsion blended to comply with west coast VOC rules. What it is good for, I have no idea. 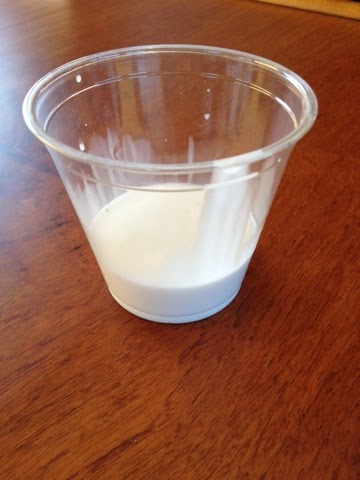 If it were mineral spirits, it would comply with ASTM D235 (the defacto definition of the term), which it does not in many ways. Basically, FALSE LABELING.

Kleen Strip does make mineral spirits. They also make odorless mineral spirits, though plain or rule 66 mineral spirits are better solvents (the KB value of odorless MS, a measure of grease solvency, is only half that of regular and rule 66 solvents, which matches my experience). All of these meet ASTM specifications and can be used to thin paint and clean-up petrol based caulks and paints. 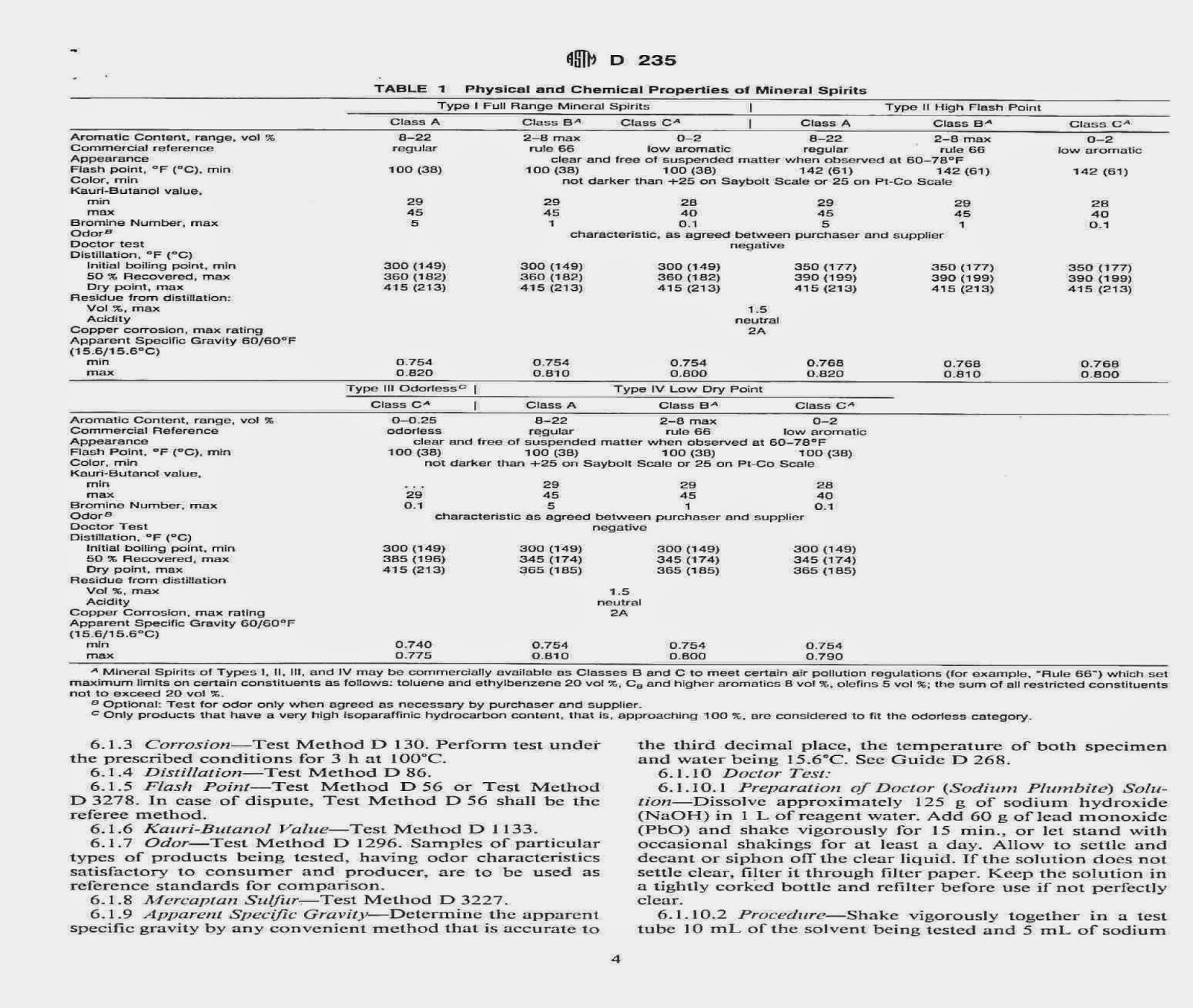