How to Carry Bicycles Without Origami

Many places we cruise are best experienced by bicycle--Cape May, Chincoteague, Tangier--most of the Chesapeake and coastal towns, really. Folding bikes are the conventional recommendation, but ask the owners how they peddle and they respond "Well, like a folding bike. Best not to go too far." They're not lighter, take up the same space (just a different shape, really), cost more, require some assembly with every use, have dinky wheels, and as a result, don't tolerate poor roads and heavy loads. Why make the compromise? A cruising boat is generally larger than a car, and for all the talk of storms, doesn't ride nearly so rough as a car on a bad road, in terms of peak impact forces or numbers of load cycles. 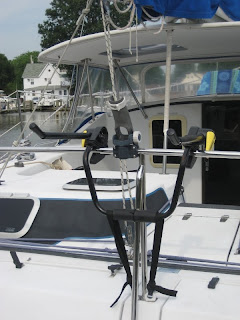 I'm not the first to ask the question. In Dodd's book Modern Cruising Under Sail the author reports successfully carrying bikes on a rack while off-shore. In another post describes the use of an unmodified rack (Narrow boat rack) on a British narrow boat.

I picked up this rack at a thrift store for a few dollars, cut away the parts that weren't needed, added a pair of Starboard hooks to fit around the rail, creating a simple rack. It's light, out of the way, allows easy unloading to a dock on the side, and easy lowering into the tender. I can use the bikes I have, and if one were to disappear or rust up, I can find cheap replacement bikes anywhere. Salt is a factor, no doubt, but ample use of oil helps and I don't cruise full time. A simple solution for most cats, at least.

I apologize for not offering more detail, but every rack and rail combination will present different possibilities. I will share this; most racks come with hooks that are meant to hold the edges of the trunk, but this will not work well on a boat, at least not on the PDQs. We tried it; the strain on the hatches looked scary and it makes opening the hatches awkward. As on a car, dedicated attachment points are much  better, stronger, simpler, and cleaner.

When this one fails, I will make a permanent folding attachment to the rail, I think, only because I'm a tinkerer. (Note 9-22-2016: 6 years later it's still going strong) 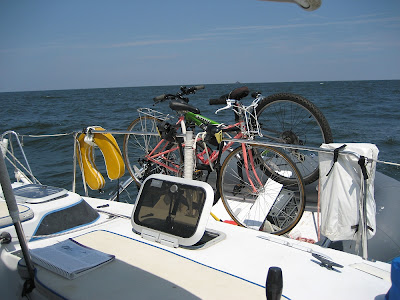 Maybe it's a catamaran thing. But I don't think so.

In Kindergarden We Learned to Follow to Simple Rules...

...Yet when it is time to load an airplane, so many have lost that simple skill.

Needless to say, I missed a connection last night because a good portion of the people on the flight couldn't figure out how to simply sit down. I wasn't damaged--I got a nice dinner and an up-grade to first class--I was amused.

Remember when teachers would ask the class to sit "criss-cross apple sauce," specifically to make squirming difficult? That's next, you know. I don't think my knees can take it.
Posted by Drew Frye at 1:38 PM 2 comments: