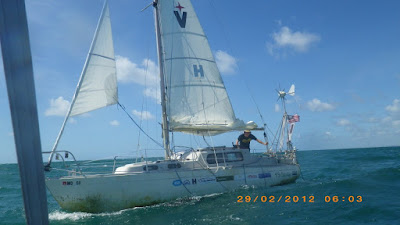 Sailed around the America's, via the Northwest Passage and Cape Horn, this Vega 27 lived an adventurous life. Now she can be found in the "broken dreams" are of the Herrington Harbor North boat yard, worn out and done. 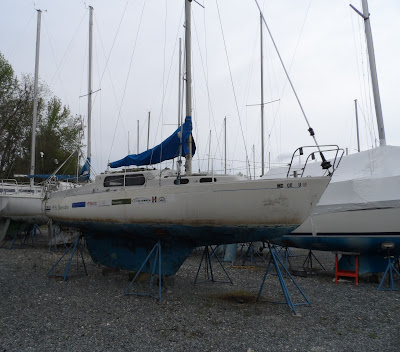 Kinna sad. Simple boats, but a number of Vegas had traveled far.

In case you wondered what is inside. 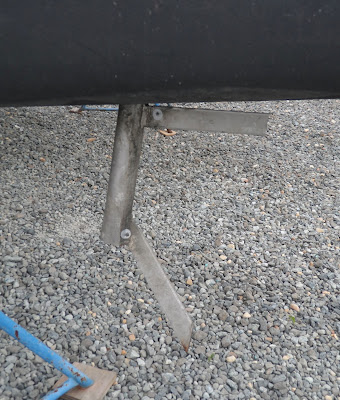 A Lot of Hidden Work

Installing air air conditioning is like a lot of projects; all the hard work is hidden, and if you do it right, it doesn't look like you did anything. I put in a good 20 hours worth on this, not counting head-scratching time. And I work fast. 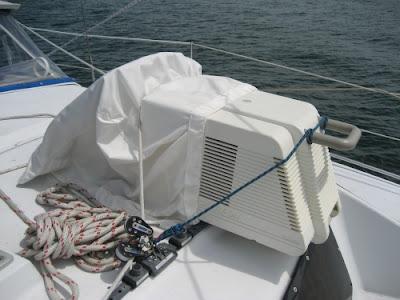 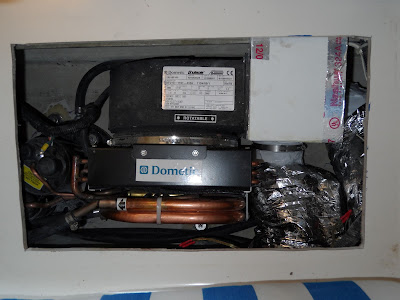 The short version is that the installation work is considerable, but it is MUCH quieter, easier to use, delivers 50% more BTUs, and consumes 23% fewer amps. Best of all, it does not leak rain, freeze the person sitting under it, snag sheets, or block the helm view. The weight is slightly less and is carried lower.It actually takes a little more space, just hidden in lockers. Fortunately, I kept the lockers pretty cleaned out, so I still have far more storage than I need.

Detailed write-up coming to Good Old Boat Magazine. Meanwhile, if you're looking for AC, I've got nothing but good things to say about the folks at Dometic. Great unit, great tech suport (I had no trouble with the installation, but I had a lot of tech questions for the article).
Posted by Drew Frye at 4:43 PM 3 comments:


A few loaners round out the field... 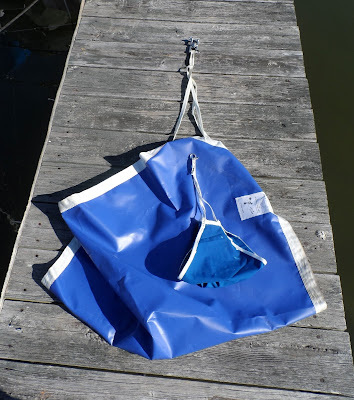 Galerider 30. My favorite, at least at this point. Very smooth and easy to recover. But you need a huge size to generate serious braking (this one is too small for the PDQ--we needed a Galerider 36). I have a Seabrake 24 for that purpose--smaller, but twice the drag because it is solid. 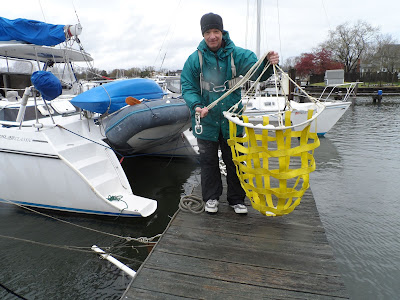 ... which led to more 1/3-scale models (not factory authorized, but as faithful as I could make them). Cone, Shark, Delta, Galerider, Seabrake. 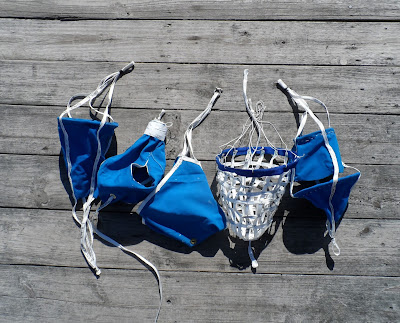 Interestingly, the 1/3-scale models behave exactly like their big brothers. Drag is proportional to cross section, so the models product 9 times less drag. Drag ~ velocity^2 up to 14 knots, the limit of our testing. They also have very similar surfacing behavior, which lead to the premise that testing these with scale rode in Force 7 conditions, with steep waves and a little engine assist, is equivalent to gale conditions with a full scale drogue. Instead of loads approaching a ton, they stay below 150 pounds, and hand-over-hand recovery is 5-20 pounds instead of 50-200 pounds; makes a real difference when there are 100-300 feet of line out! The result is practical testing at more speeds and with more combinations, allowing full-scale testing to focus on the right questions.

After testing full scale drogues at speeds up to 7.5 knots and confirming scalablity, I built a universal cross reference table (Practical Sailor) so that you can pick a drogue for your boat, whether for steering or speed reduction. Generally it agrees with manufacturers, but they often have different theories regarding how much drag is best.

Now I am starting to focus on tandem drogues; does it make sense to trail 2 drogues on the same rode, as conditions get worse? The answer seems to be a resounding yes. Unlike anchors where rode forces destabilize anchors, in this case they seem to stabilize each other. Doesn't a second drogue add a lot of expense? Not really. Because stability is less of a problem, less expensive drogues like the Delta or Seabrake are valid. The rode and bridles are already paid for. Basically, you get the advantages of a series drogue, with more adjustability, flexibility, and easier handling.

The real bargain? It may be a surplus aircraft drogue I bought on E-Bay 15 years ago for $40. To my eye it is just as well built as the Paradrogue, and it gives a lot of stopping force for the buck. Too much for steering, too much for running a bar, but maybe just the thing for parking to drift fish.


Don't let anyone convince you that blocks work for making bridles. They just get stuck on the back of the boat, the obvious conclusion of a simple vector diagram. There are a lot of images in books and on the net that disregard the simple fact that the the block line must bisect the bridle angle. 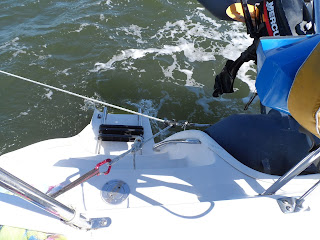