What to do at the end of a hot summer's cruising day, when there is nothing that really needs doing? Not practice MOB procedures, that's certain.

I cued a movie to watch while dinner was simmering, "Morning Light", about a Disney Transpac team, and it had a bit on MOB procedures. With a full crew, of course, you simply muscle the bloke back on deck. With a family boat, you need something that will work for the smallest person recovering the largest, and given the crap tasks Dear Dad often draws on rough days, he seems most likely to go for a swim. It also has to be simple enough to remember. And so we found ourselves beginning a long over-due MOB practice.

We've practiced picking up objects from the water, so getting along side, or at least within Lifesling range is a known challenge. Actually testing the Lifesling is another matter. 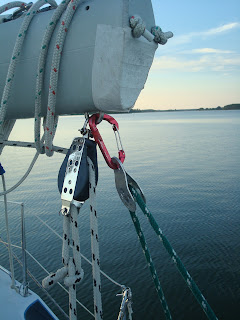 On the PDQ 32, using the spinnaker sheet seems obvious; it wouldn't be in service at the time of pick-up, there are two dedicated 2-speed winches on each side, and it's long. The boom can swing over much of the stern of the boat, is easily positioned with the traveler and if needed, a line forward to the midships cleat. All that is needed is a boom end carabiner and a climber's rescue pulley. A rescue pulley is a sort of simple high strength snatch block, optimized for quick deployment and simplicity, and rated for lifting man-size loads. We keep these clipped to a pocket by the helm seat at all times; you never know when a snatch block and biner will serve some work-around or as a genoa lead. The working end of the spinnaker sheet simply goes up to the block and down to the victim and can be set-up in seconds. DON'T use the spinnaker shackle to attach the victim; the damn things open too easily when dragged across a surface; tie a figure-8 on a bight at the end and use a carabiner to clip either harness or life sling. 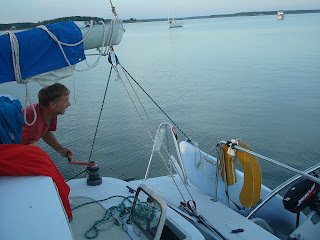 There are 2 gate locations on each side of this boat: the sugar scoops and the aft outside of the hull. We tested both with the kayak, just to see the run of the lines. Very smooth either way and only two fingers were required to turn the winch. 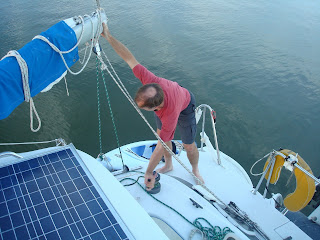 So, what happens with real weight on the line? We tested it with a human, the lightest crew lifting the heaviest. 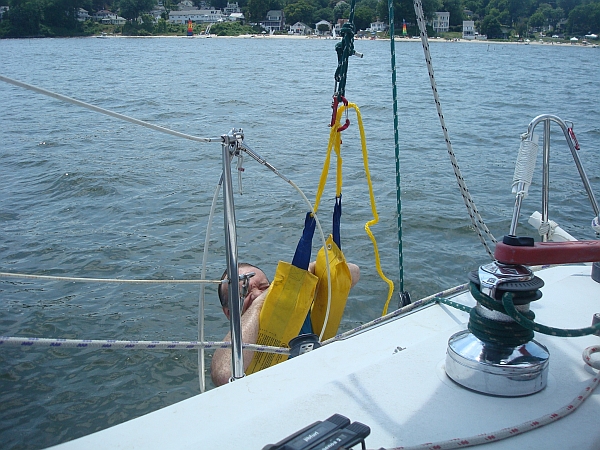 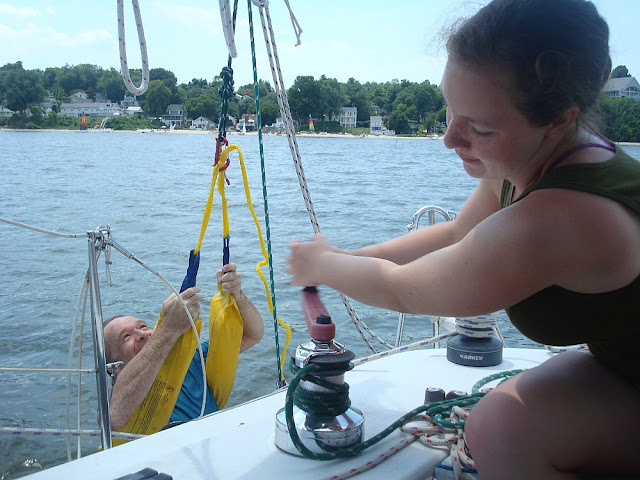 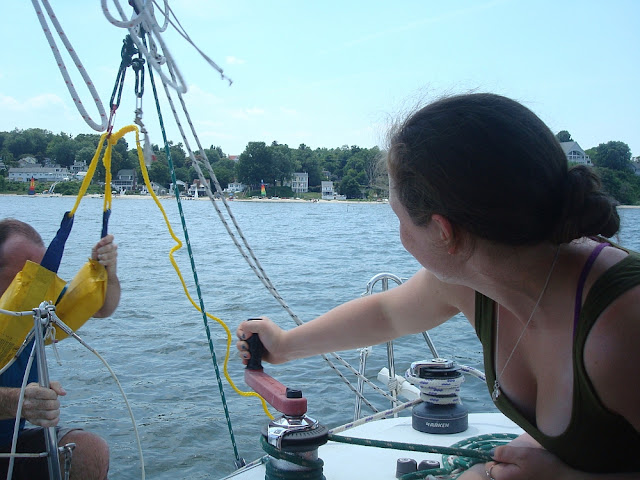 Better yet, wear harness and tether, stay on deck, and avoid the whole business.