Crimpers: the Good and the Bad

The second article I wrote for Practical Sailor was a 1-year salt environment chamber test of anti-corrosion greases and sprays, terminal blocks, wire types, and crimp connections. Over 300 crimps and 200 screw connections made for the test without a single failure or increase in resistance with time (some quick-connects failed). Credit goes to proper tools; ratchet crimpers make reliable connections time-after-time because they do not release until a preset compression is met. 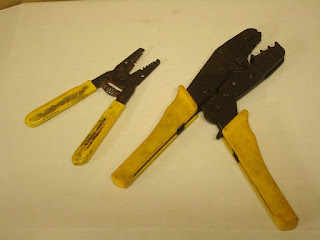 Proper ratchet crimpers. Most are good, but skip Harbor Freight; I looked at theirs and the action was sloppy. Required features are adjustable tension (small wheel near hinge marked +/-) and dies that make 2 crimps. Proper strippers are important too. While it is certainly possible to use a knife, with stranded wire it is important not to nick strands.

Today I faced a home repair task; an oven with a fried selector switch. After 40 years there was also some failed wire and connectors, so a dozen crimps would be required. I keep my good crimpers on the boat, so I pulled out a pair of cheap ones I've thrown away and then recovered from the can a few times. I've been meaning to pitch them for years, but I'm cheap and good ratchet crimpers cost. And squeeze as I might, I couldn't make a crimp that wouldn't pull of the wire if given a good forceful yank by a helper. Not good enough. 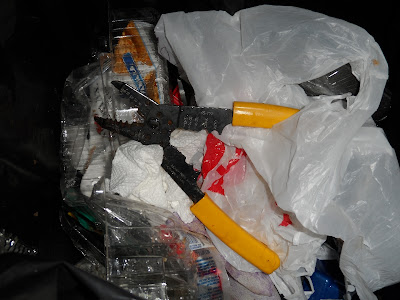 Gone for good this time. Their very existence should violate the electrical code.

Home Depot and Lowes don't carry ratchet crimpers, only the pliers-type, which I dislike very much. Electrical supply houses do, but they're not open after 5 o'clock. Advance Auto Parts carries a perfectly serviceable pair for $29.00, which is quite an acceptable price when you're heading out of town and your wife would like to have her kitchen put back together. They also get thumbs-up for quality, whatever that's worth. Not quite as nice as my Ancor crimpers (for 2.6 times the price) but very, very close.

As with any crimpers, before starting a project make a test crimp with the wire and fitting brand you will use. Take the finish crimp to the bench vise, clamp it in and pull as hard as you can. The wire should not pull out without significant damage and significant effort.

In the process of testing a few marina nieghbors' Raycor bottoms and reviewing the literature, I've learned that many diesel tanks contain some seriously acidic water. Literature research indicates that 2,500-10,000 ppm acetate is present at the 95th percentile of contamination--meaning 5% of the tanks contain something equivalent to 5-20% vinegar. Field pH testing produced two tanks with a pH of 3.5-4.5, also like that of weak vinegar. When I carefully pipetted the water and removed all possible diesel, yup, the Raycor water samples smelled a bit of vinegar. None of the tanks I sampled were thought to be infected, but certainly they were, in some small way.

Or could the acidity simply be common in the small bits of water we get with the fuel? That it concentrates in tank bottoms, as condensate extracts what is in the fuel and drags it down? Can't say, other than the tanks with no Raycor water were also tested by extracting the fuel with 5% distilled water and found to have neutral pH.

When I looked at the corrosion testing coupons after just 6 days hours of exposure to our synthetic corrosive mixture, only the most robust inhibitors were doing well, and uninhibited samples were doing very poorly. Premature tank failure from internal corrosion seems likely in most cases.


(No pictures--Sorry. I don't like disturbing the coupons until the exposure is finished)

Interestingly, some formulas that did fairly well in e-10 gasoline testing are not impressive. Not too surprising, now that I think about it, as the ethanol in gasoline has a major effect on corrosion chemistry and inhibitor action. With e-10 the salt solution is always in contact with everything as the ethanol dissolves the water and salt. Not true in diesel. For example, Seafoam did well in e-10 but is failing badly in diesel. One treatment, Valve-Tech, which claims to help suspend water, is actually making the situation significantly worse, with the fuel becoming discolored in just 36 hours. We saw the same trend in testing gasoline additives; any additive that suspended water tended to make corrosion worse, presumably because it made the water more available...

... Which should remind the reader that my gasoline testing has all centered on e-10 for the selfish reason that it is what I have. It is what most of us have. While the lack of ethanol is not likely to make the winners do badly, ethanol may be the reason some failed; they were never formulated for it.

Biocides are failing. Well, they never made anti-corrosion claims.

What is working? Star Tron is doing very well, at least on the upper sections. I believe this is in part because Star Tron is an effective emulsion breaker, preventing water suspension. In the past Star Tron has been unimpressive, generally not doing much, but then again, the effects were always positive. This time it is headed towards being a clear winner. Stabil is doing well, again; while it has never been "best" in in any of my testing, it is always in the upper quarter, suggesting versatile formulation.

The bottom line?
A teaser. Practical Sailor will be publishing the results of our lab and field vent filter testing in the fall. In the lab photos below, one jar was sealed, one was vented through a small hose, and one was vented through the same size hose but with a scale-size silica gel filter. Two discolored, sludged and corroded, one did not.   Guess.