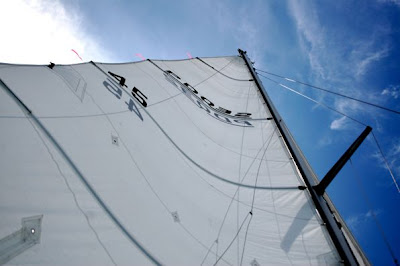 I admit it; I'm cheap. And I enjoy fixing anything I can, to prove I can. If I have to fix it though re-design, that's even better, and if the repair method is unusual... better still. I'm a tinkerer.

The main sail leach on my boat had been falling off to leeward in a terrible way, as much in light winds as stronger stuff. No just an inch or so - a regular S-shape as much 12" to leeward. Another PDQ sailor mentioned that thicker battens had been installed in his main by a sail maker and had worked for him. Being cheap and willing to make a simple thing more complicated, I decided that tapering the battens by stiffening the back 60% with carbon fiber TOW (tension oriented weave or unidirectional fiber) would do the trick and not thicken them so much that they would not fit the pockets. After all, most beach cat battens are tapered. The draft of a sail is tapered - more in the front, and less as you move aft. And it was also a fix and improvement I could finish for the next weekend!
Batten stiffness is rated by the weight required to deflect a 40" sample by 4". The original battens were 3 pounds for the upper 2, and 4 pounds for the lower 2. The lamination changed this to 8 pounds on uppers and 10 pounds on the lowers, exactly what my back-of-the-envelope calculations using internet carbon stiffness values predicted. Unidirectional carbon works for this project because it is that it is not just stronger than glass, but also much stiffer. If you were to substitute glass it would take many layers and the battens would get too thick to fit the existing pockets. Unidirectional fiber is required; more of the fibers are oriented in the correct direction and they are not deflected into a serpentine path by the cross weave.The forward part of the batten remains nicely flexible. It seems so obvious; the battens on my Prindle were tapered, and in proportion to the PDQ, much stiffer at the leach that the stock PDQ battens.
A simple job, really, easily accomplished:
The carbon tow came from West Marine, though it is not in the catalog. Defender Marine has a 3" x 50' roll, though I think I bought a `15' roll, and that was just enough. I split the 3" roll to long 1" strips with sharp scissors - delicate because it tries to fall apart,  but not difficult. There were no tricks to the laminating, other than starting at the leach end of each batten, adding resin to only about 1-foot of each batten and letting that soak while I added resin to the first 1-foot of the others, and then going back to the first to finish the full length. Doing it this way keeps the fiber in place, rather than having it creep as you brush the resin toward the luff end.

I am still going to re-cut the sail. I believe I need to remove ~ 3/16" out of 2 seams, 50-70% of the way up. The "after" photo shows some residual sag. But the stiffer battens were a huge help on the sag and treated some vertical wrinkles as well. I will be happy until fall. 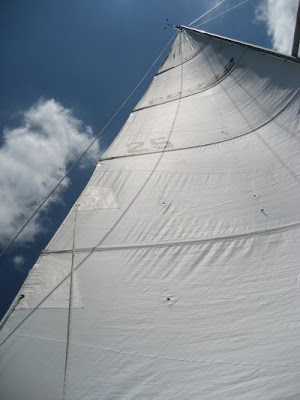 An easy project for any boat with full length, un-tapered battens. Like so many engineering projects, it is invisible when well done... but I appreciate it whenever I look up, I found myself able to walk away from a couple of well-sailed 45-footers (all sail boats heading the same way are racing), and my pocketbook appreciates receiving a few more miles from a good sail. The speed difference is appreciable.

After: not perfect, but much better! 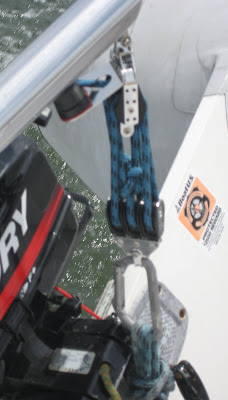 Hoisting a dinghy with the engine in place can be a real chore near day's end - more so when the stock pulley arraignment is only 3:1 and the cleating arraignment is primitive. On my PDQ 32 it is also frequently necessary to coddle and wiggle the dinghy into place and make little minor lift adjustments. It's 9-foot length only just fits between the hulls.

Better, add real engineered purchase with cam cleats so you can pull a bit at a time, leave the engine mounted (secured to the dinghy, of course), and even have a child help. Do remember when lacing the 6:1 blocks that they require a peculiar 90 degree lacing pattern to keep the friction low: 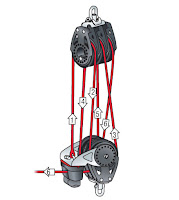 The blocks are Harken  (triple w/cam and becket and a plain triple) and the line is 1/4-inch.

Also note the spreaders used to get the bow of the tender as high as possible. I later switched to aluminum wire gate climbing carabiners, as they are easier to use and more dependable.

Tricing-up is also a good idea, in any sort of waves or if the boat will be unattended.

Easy Mooring with a Dinghy on the Davits 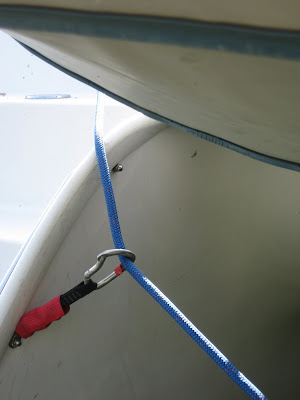 The prior owner always kept the dinghy on the deck, since they found no simple way to tie between pilings with it still on the davits; on many catamarans if you connect dock lines to the stock cleats in standard criss-cross practice, they pass right through the dinghy.

The conflict in space is resolved using a short lanyard to deflect the line down and away from the dingy. All of the parts come from the local rock climbing store. As a mountaineer from way-back, they all came from my too-worn-to-climb pile. 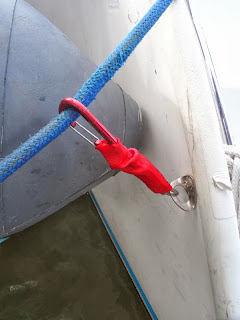 The carabiners should be the wire gate type. The conventional biners in the first photograph soon locked up with corrosion and was replaced with a wire gate biners. Wire gate biners are handling the marine environment without corrosion or ill effect. I do feel it is important to use climbing biners because the are MUCH lighter than stainless marine biners, which prevents banging on the hull and gel coat damage. They carry the same 4500-pound strength rating.

Replace the washer under the one of the nuts securing the transom hand rail with a stainless bolt hanger. The nice thing about bolt hangers is that they require only a single (often pre-existing) bolt, are 5600-pound test with a 3/8-inch bolt, and are available in 316 stainless for just a few dollars. Very handy on boats, I have 10 installed, assorted places. Add a 1/4-inch quick link, a 6-inch webbing sling, a carabiner, and wrap the rough parts in 2" hollow nylon webbing to prevent chafe and guard against UV. Neat, durable, and mightily strong.Also a handy tow point for kayaks and dinghies.

How much force? I took a bunch of load cell measurements at the dock in moderate and storm conditions a few years ago. I also did this on bulkheads. 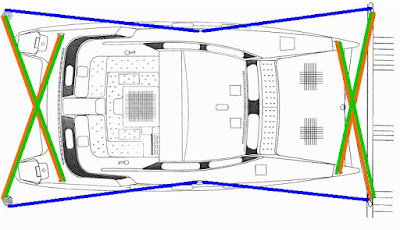 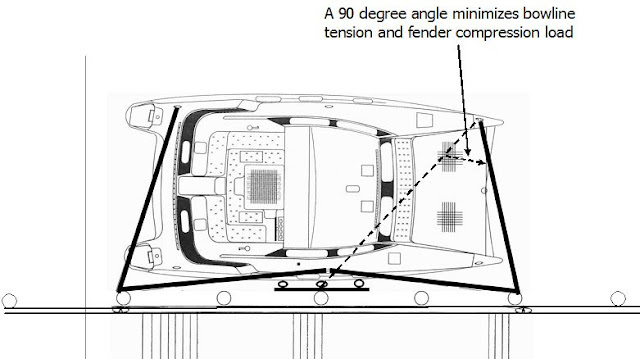 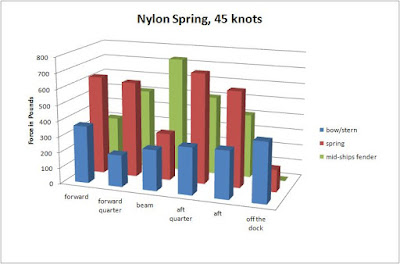