Sewing gear back together is a traditional cruisers' pastime, and I've certainly passed time resewing the seams of our enclosure. I actually find it enjoyable, weaving the thread back and forth at anchor or dock, when there's nothing special to do. If there are sailors about a sailors palm is always a conversation starter.  Some haven't learned to use it efficiently, some are afraid to try their hand, and someone always has a good tip. However, after the Stayglass spit along the bottom edge this winter, it was time. Additionally, the glass had hazed and I've gotten tired of not being able to see well, rather like having cataracts or atrociously dirty glasses that can't be cleaned. 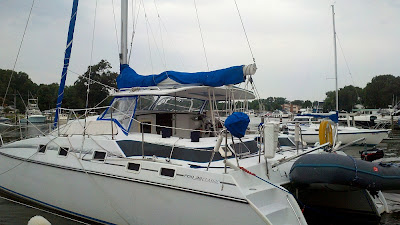 Courtesy of Canvas Connections, Deale, MD. They were timely on the estimate, stuck to the bid, and met my delivery requirement. It was over one boat buck, but it exceeded my DIY capabilities and that is worth payment.
I have also posted this to illustrate our genoa and spinnaker sheeting, since there have been questions. There is a sail track just forward of the aft cleat with 2 blocks mounted. The forward block is the genoa block, which is a good windward to beam reach setting (if broad reaching or running wing-and-wing for long, we move the lead forward like this). The aft block is for the chute (if the tack is moved to windward we can move the lead forward the same way, but seldom do). These lead adjustments are often made to be adjustable by pulling a line--and they were on my last boat, a high performance design (Stiletto 27 with many tweaks)--but I chose simplicity and fewer lines for this boat.
What else is obvious? Numerous rod holders, anti-chafe gear, stern mooring line redirection, window covers, and solar panels.
Note: the only products aproved for preseving and cleaning Staglass are by IMAR and are brutally expensive at West Marine. Defender is about $8/bottle less. They are good though, and Practical Sailor rated them the best performers. Just boat bucks....

I travel altogether to much in my work, but there is a silver lining, beyond meeting good people and sometimes going interesting places; the boat is "sort of" on the way to the airport. Often I can manage a little time and get some hours and a night on the boat, though not always sailing time. Still, I'll take it. Projects that might subtract from sailing time get done and quiet time at the marina is bliss.

My last stay, as I turned in for the night I realized the reading light and fan didn't work in either cabin, and neither did one of the cockpit lights. Since my solar panel project had passed through both of those boxes and only those boxes, it seemed clear I had made some error that I could track down in the morning.

My multimeter battery was dead and I was too lazy to look for a replacement. I opened the cockpit light but found no obvious fault. Not surprising, since I had not disturbed any wires there. Then I dropped the ceiling on the starboard side. When I dropped the ceiling for the solar project the wires leading to the ceiling fixture had flown apart; the PO had done some stupid wring-size crimp connector splicing and everything came apart. I had right-size spliced it back together, but I had certainly guessed on some of the connections; there seemed to be an obvious pattern, I had used my meter, and I thought it was right... but I couldn't remember it I had tested the reading lights (I retrospect, I remember that I did). I tugged at all of the wires; tight and solid.

So I chased down a battery for the multi-meter. I had one on the boat, right where it was supposed to be and had the meter working in minutes. I should have done that first.

I checked the cockpit light. Power in, power on the pass-through. Clearly a bad switch. Since I picked up an unused spare at a marine consignment store for $3.00 a year earlier, a simple fix. It had been acting up and I should have figured as much, rather than place blame on the solar project. Easy. Two crimps and two screws.

Lesson one: Start with a multi-meter. I checked the power on the starboard ceiling fixtures; no faults. Huh. It seemed the solar project was not involved. I traced the feed to the cabin lights. Sure enough they are separate from and unrelated to any other circuit (though there are many lights and fans on the "cabin light" breaker, the breaker feeds a pair of terminal strips and the aft cabin reading lights and fans run off a single feed from those strips. A mental light came on; we had a birthday party the week before with a group of teen age girls (my daughter is 16 now!) and as a result we had stuffed an unusual number of PFDs in the stern lockers... right where the cabin lights branch apart. 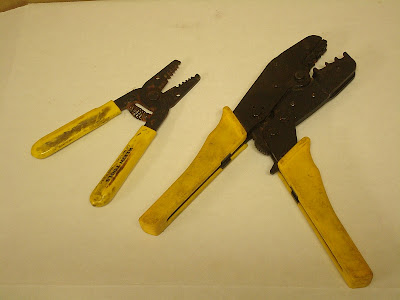 Proper wiring tools are essential
And sure enough, the PO had added fans and in the process, used crimp connectors. I'm a strong believer in crimps; I did hundreds for a 1-year hyper-saline salt chamber torture test for Practical Sailor Magazine, without a single failure. But the PO apparently either used a cheap tool or did not reset the tool for the fittings he used. In fact, the fittings were so far below standard size, that the die in my ratchet crimper for 2 gauges smaller fit perfectly; it should not have closed at all on that setting with that wire gauge. The wire had easily pulled out, without any damage, but remained hidden from view inside wire loom.

Problem solved for a few pennies... and at least 30 minutes of wasted diagnostic time because I was not systematic. Well, I knew better, now the lesson is further reinforced, my multimeter has a new battery, and now you know better as well. 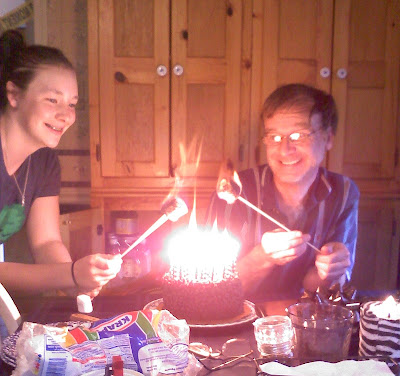 I'm a fossil and come from the pre-cycle computer age. What's more, I like to understand machines so as to better work with them, but that desire doesn't extend to computers; I like to know as little of them as possible. Today's subject; bicycle gearing and attaching files to in Blogger.

For example, modern bikes have many gear options, the purpose of which are to decouple pedaling cadence from incline and wind resistance. In English, you can keep your feet moving at their best speed while the head winds and hills conspire to make you peddle too slowly.

Many have studied the whole business of cadence (peddle RPM) and how it relates to efficiency. Eventually all cyclists realize that when peddling easily a slower cadence is most efficient (70-80 RPM), when moving more briskly faster feet are more efficient (85-95 RPM), and when really delivering a best effort over a few miles, even more is is better (95-105 RPM). Why? Because slow twitch muscle fibers like low forces but are aerobically more efficient. Fast twitch fibers fire when forces rise. Curiously, the fast/slow naming convention is primarily a misnomer carried over from sport where higher speed and higher force go hand in hand. It's about high force/low force. It also explains why high reps just don't make you stronger.

While you can do this by feel, some calculations clarify, for me, what is going on:

If you click the down load tab to the right, you get a copy of an Excel file you can play with to your hearts content. Can't imagine why you would want to, but I needed practice.

Is this the best way? I seriously doubt it, but it only took a few minutes to figure out and it's a free service. Not bad.
Posted by Drew Frye at 1:36 PM 1 comment: