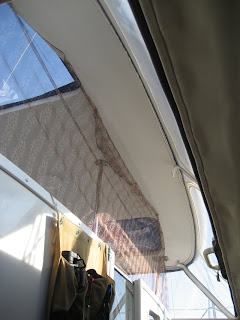 Every boat is a compromise. For 32-foot catamarans, one such compromise is providing standing headroom on the bridge cabin without too much windage or too little wave clearance under the bridge deck. The Gemini 105mc compromises by providing a wave-scraping 3 inches of clearance and terrible visibility forward.  The PDQ 32 does it with a slider that can be closed for inclement weather. It is well covered by the hard top, but mosquitoes fly right in, unless the slider is closed, causing ventilation to suffer just when it is needed most.

We added a removable screen, attached by Velcro, that rises from the bulkhead to the ceiling. We attched medium-duty self adhesive Velcro at about 12-inch intervals to both the boat and the net. There's a trick--although Velcro sticks well to gel coat, the netting provides a challenge, since there is no surface area. However, if a matching square of duct tape is pressed on the opposite side, the adhesive coatings see each other through the mesh and the grip is positively tenacious. I may tailor a more permanent version later, but so far the beta version seems very workable. 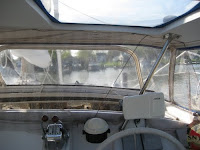 Ventilation is maintained and the screen can be left in place if motoring a bug infested river on the Inter-coastal Waterway or the Chesapeake. The door is unobstructed.

Note: after 2 seasons in some bug infested areas, the only required upgrade was to add some more Velcro. A continuous strip of the hook side on the ceiling prevents the dirty buggers that congegate there from cralwing under the edge. We did not add additional velcro to the netting, since the hook part catches just enough in the netting to close the gaps,without making installation and removal a hastle.

We were able to leave it up when motoring in some particularity bad areas.