Keeping a Cruise-and-Carry AC unit On-deck: Good Idea, or Dissaster in the Making?

Note: this is my experience with a catamaran, with a relatively level deck. If you have a leaner (monohull) your experience could be different. Additionally, our cabin top is high above the water and the ride is generally dry; if you have a chronically wet deck, that would be very different.

Spring 2016 we replaced this with Dometic Turbo installed air conditioning. Expensive, but slightly less weight, much quieter, much more even cold distribution, more BTUs, less amps, clear deck, better visibility, less lugging, and no blocked hatch. Yup, it's better all around. If you can do the installation work yourself, installed is the far better value. However, installed is a little complicated. I have an article scheduled for publication spring 2018. Quite a lead time.

The reality was not so grim.

I carried our A/C unit on deck for the better part of a 500 mile cruise around the Delmarva Peninsula. I carried it on deck through small craft advisory conditions, close reaching up-wind at 8-9 knots, spray covering the boat. We carried on through rain. We carried on through 8-foot swells generated by hurricane Bill, taking green water the length of the boat on one occasion. With two simple st 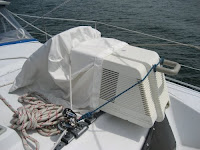 raps through the carrying handles, the unit never shifted an inch. We did get a few drops now and then when there was heavy spray or rain. When we took green water probably a teacup came around the edges. Thankfully, that was one stray breaker; if it had been more than that we've certainly would've taken it below. We get nearly as much leakage from condensate in humid conditions. We learn that a large beach towel laid over the hatch shroud as insulation eliminated the condensation.
The straps are the sheet from the self-tacking jib (we use the 150% genny most of the time) and a length of 5/16-inch low-stretch line tied with a truckers hitch. This was very secure and took only a minute to rig each time.
We also learned that it's a simple matter, at least on the PDQ 32, to lower the unit down through the slider at the far outboard edge, and then forward onto the port saloon bench. It is a one-person job and settled weather and an easy two-person job even when it's little bouncy. Do pad the open vinyl window with a towel to prevent scratching.

Would I keep the unit on deck as much as we did before, knowing what I know now? No. I would take it down anytime 20 knots of wind as predicted or anytime large breaking swells are a likelihood. If a thunderstorm approached I would probably put down the hatch, if I believed that waves would be an issue. It is also a bloody nuisance if frequent tacking is anticipated. But for cruising in fine weather and light rain, were tacks tend to be far apart, yes, next summer it will live on deck.

Tip: If you cover the canvas hatch adapter with a large beach towel, dripping from condensation and leaking during rain storms will be less, and efficiency will be greater. Do not block the cooling fan grating.

Tip: Cut a 24-inch square foam floor tiles to fit the AC unit and opening. This greatly reduces both condensation and rain leaks.

Tip: The existing leveling leg will not maintain its position underway and under the pressure of lashings; the cam will slip. Drill holes, about 9/32- to 11/32-inch or as needed to produce a light push fit, through the leg athwart ships to accommodate a section of FRP tent pole. I also added a layer of EVA foam to the bottom of the foot, for additional padding, after the original rubber moulding fell off.