On a pleasant windless day at a dock 150 miles from home, I decided to partly lower our furling genoa so that I could put a few stitches and necessary patches on the sacrificial leech cover. A simple morning task to pass the time in a sailorly way. We were 10 days into a 2 1/2 week cruise around the Delmarva. I released the halyard tension, lowered the sail a few inches, and watched 48 ball bearings merrily dribble onto the trampoline, filter through the netting, and plop into the harbor.

The furler had been prone to catching for the past few days. It would roll fairly easily for a bit, then seize, and after a good tug, roll easily again. The bearings in this furler are half-and-half stainless and Torlon, and it seems the Torlon bearings had worn down to where the stainless bearings would ride up over them. Eventually, the wedging force pushed the lower circlip out of its groove and the lower race fell apart, unnoticed. My genoa is a little to long on the luff but still, it sets very well with no halyard tention; in fact, some wieght rests on the tack, just a little, and this held the upper race in position. When I went to re-hoist the sail the the foil was lifted by normal friction in the groove, the top half of the furler was lifted, and everything fell apart.

Although I could no longer furl the sail, I could still use the luff extrusion as a foil, so we lowered the large geona and planned on using the much smaller self-tacking jib for the 3-day trip home. The weather forecast called for strong winds on the nose the first day, followed by spinnaker reaching conditions for the next two days. That is how it worked out, so the loss of the furler was no great handicap.

Replacing the bearings is quite simple. Each race (4 races) contains 48 x 9/64-inch 440C stainless balls, McMaster-Carr part number 9642K31. Parts are also available at Pompanette Co.. They are most easily installed by assembling the races first, and then inserting them from the bottom up, flipping the assembly over as needed. I used waterproof grease, but if you are using plastic balls and wish to assemble the mechanism without grease you will still need something sticky to hold the balls in place; tooth paste works and will rinse out. I have used it on other projects with Torlon balls. Be certain to tap the circlips securely into their grooves. Be careful to position the four
set screws into the matching holes in the drive tube. In my case I was not able to separate the stainless steel basket from the bearing tube and thus was not able to reinstall the furler line in the normal manner. However, a clove hitch around the spool with the stopper knot on a dead-end has proven secure. The heads of the set screws provide extra grip. 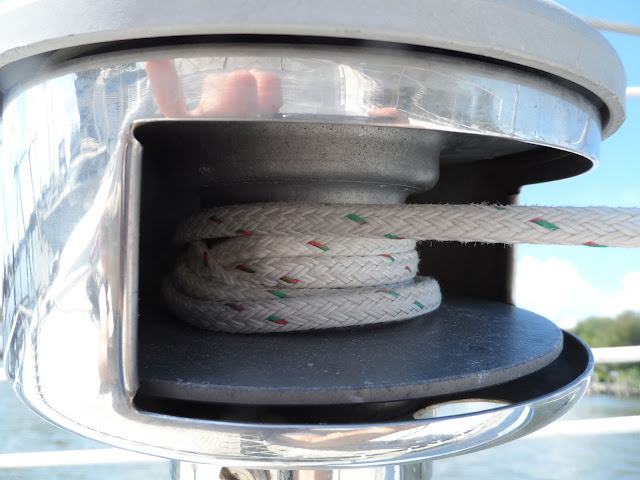 Even fully furled, with the sheet around the sail twice, there should be a few turns on the drum. 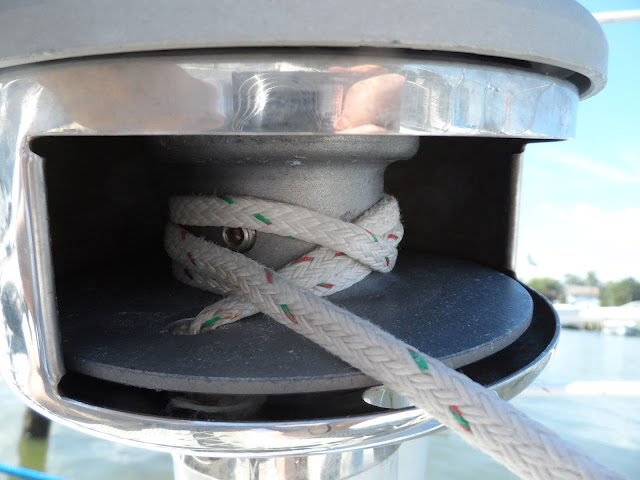 If you cannot a proper knot through the hole (sometimes the drum is stuck to the core due to corrosion) the line can be secured with a clove hitch. The set screw nubs are enough to make it secure.

In my case, since I elected to get rid of the failure-prone mix of Torlon and stainless, I am using grease. To reduce the intrusion of salt spray I fitted a large (~3"x 1/8-inch thick, fitting just inside the tack fitting) polyethylene washer to the top of the stack, just above the top circlip. That is really the only place water can enter. I drilled a small drain in the stainless basket. We will see.


Notice that I also added a plastic ring above the furler as a drip ring, deflecting rain that drips down the forestay. Does it help? Not sure, but they are still smooth after 4 years. In a few more years I will open it up and re-grease, but for the moment, it feels and sounds (no squeaks or vibration--just smooth) like there is still grease in there.

What I am actually doing in this photo (11/2015) is spraying water NikWax repellent treatment on the furler line. I sail all winter and this prevents the line from freezing, which can be a big problem. 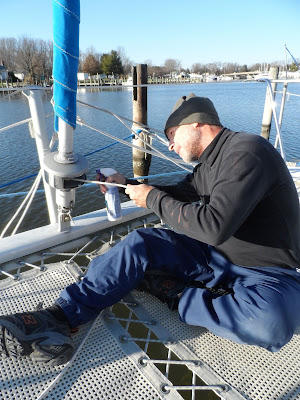 Piece of cake. I imagine I will be doing this every 5 years or so, under considerably less mental stress.