I enjoy the simplicity of trolling for big rockfish with a cuban yo-yo. I can keep the sinkers and long leaders rigged, they take no space to store so I can easily keep many different rigs prepared, they rig to the rail quickly, and most of all, they work. 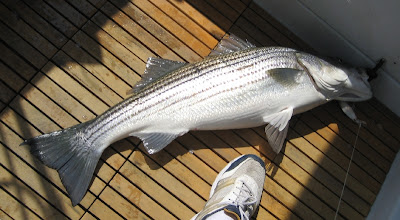 I've been told a large fish will snap the line. Apparently not, certainly not today. The only rigs I've lost have been to crab pots I didn't see. I've been told you need a bungee cord shock absorber. Since I troll 150 feet of 80-pound mono-filament and that can stretch 10 times as far as any reasonable bungee cord, the bungee cord makes little sense if you actually do the math; an additional 30 feet of line will do as much. I've been told you can't play a large fish. Well, I landed the above 38-incher in minutes without gloves and no strain. I did walk up and down the side decks a bit for this one; she started running toward the boat faster than I could wind, but not faster than I could easily walk and wind.

Mostly, I like the Old Man and the Sea, whether the book, or the performances by Spencer Tracy or Anthony Quinn. There is something basic about pulling in a fish in with minimal technology. Fishing should be a simple thing, man against prey--it's nothing when reduced to an arms race, graphite composites and fish finders and stainless steel and all of human technology, against a simple fish.

Note to sailors: you've got to slow down to catch rockfish; 3.5 to 4.5 knots seems to be the best range. Later in the summer, particularly in the southern Chesapeake, you may catch bluefish at 6-8 knots.