Edit: Why a Jordan Series Drogue is NOT a Very Good Steering or Speed Limiting Drogue

Usually there is a specific event, often personal, that motivates me to research something. In this case, ~ some years ago I jammed a rudder on a submerged tree. I remembered a the loss of Too Good to Be (Alpha 42 Catamaran) due to a bent rudder, and several friends who have been towed in after striking logs. A boat was towed hundreds of miles across the Gulf of Mexico last year, after loosing a rudder in nice weather--with a steering drogue I would have been underway again in 10 minutes, no need to make a call, other than perhaps a Pan-Pan to the US Coast Guard as a condition report. It occurred to me that emergency steering is a least as important to the coastal sailor, because there is so much more debris to hit. So I got interested in emergency steering and drogues in general. 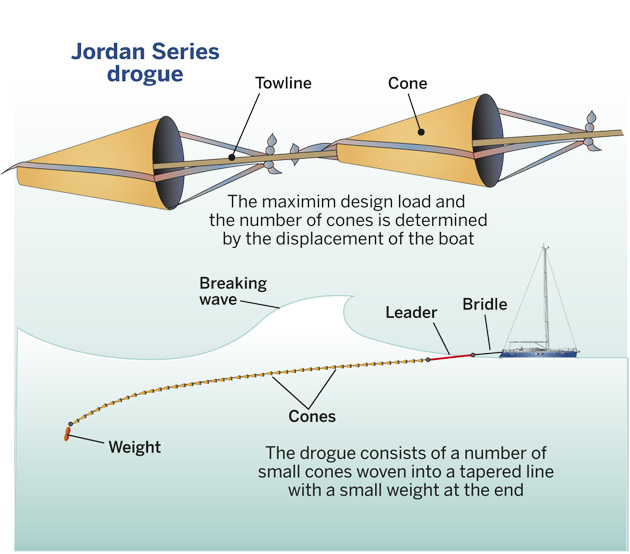 A JSD is unarguably the correct tool for most serious storm conditions. You can Google "JSD Coast Guard Report" for the details, so I will only summarize. It was an innovative and clever leap forward that sidestepped many of the problems associated with conventional drogues: 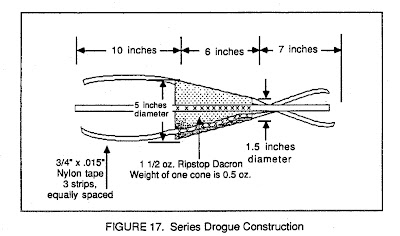 However, it has serious short comings when used at higher speeds as a speed limiting drogue, or more importantly to me, for emergency steering: 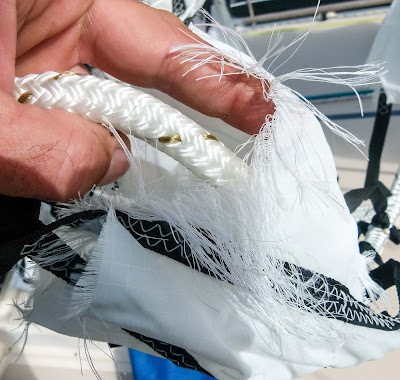 And yet it has  potential advantages: 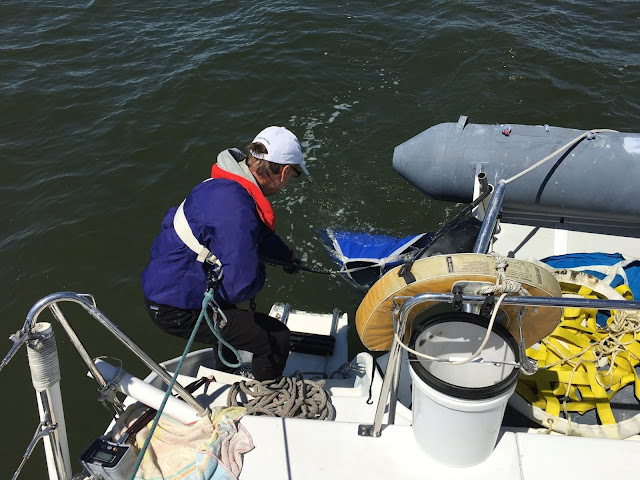 Recovering a Delta Drogue 72 (about 24-30 inches across). Even in clam weather it is extremely heavy and must be dumped first--impossible unless you are standing at water's edge, which won't always be practical. Other drogues are awaiting their turn in the dinghy, including a Galerider, Paradrogue, Seabrake, cone, and JSD  from Ace Sail Makers.

In use the drogue is often pulled in very close to the transom, to reduce drag by lifting the drogue. This is how a Seabrake 24 deploys in 10-25 knots for emergency steering; in light winds it is in close, in stronger winds I you add an extension between the chain and the bridle.


I decided to test a modified JSD (call it a Series Steering Drogue) as a speed limiting and emergency steering drogue:

The most obvious difference is the that the series steering drogue is much longer, about 75-100 feet. But this is part of its strength--only by distributing the load can the drag remain steady is something as fragile and turbulent as water.

The standby rode is to allow us to seamlessly add the rest of the JSD if conditions deteriorate; just attach the rest of the JSD, along with a dedicated bridle attached to the JSD chain plates, and cast the spinnaker bridle free (you will recover it when you recover the JSD).


And it was a complete failure.

First, the trade mark JDS droop, which allows the tail to run deeper under water does not occur. At higher speeds (5-7 knots) the JSD is pulled right up to the surface by water drag. The droop is not unique to the JSD design, but is only an artifact of Jordan specifying enough cones so that enough drag has been added to reduce the speed to 2 knots or so, which allows the tail to sink. Any drogue design will do this in an equivalent manner, as long as there are at least 2 units and the speed and weight are equal. Although it may retain some resistance to damage if the motion is reversed on the back slope, this is not he case with steering and speed limiting drogues--motion is always forward.

Second, smaller drogues (cones in this case) are inherently less stable when running near the surface, and are more easily disturbed by the movement of waves. A large drogue can run at shorter scope because it pushes a lump of water above it, whereas small cones push only froth. The small cones simply splash on the surface, completely unstable, unless the scope is at least 75:1, which is impractical with a 4-foot transom (I had to test them by anchoring near the waterline). Cones also zig-zag and flutter. This is very hard on their construction, fatiguing the cloth.

Efficient shapes. A cone produces only 55-70% as much drag as a Seabrake or Delta Drogue of the same size. The design is easy to sew but not advanced. 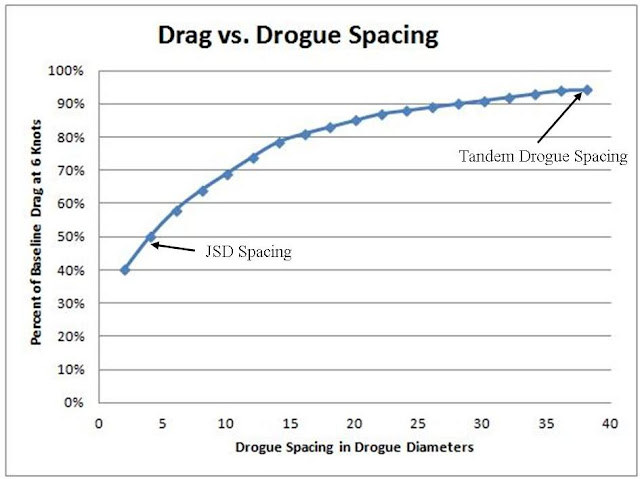 Finally, drogues are inefficient if they follow too closely behind one another, much like a racing cyclist enjoys the draft by following another closely, and the higher the speed the more significant  the effect. Thus, a steering drogue based on JSD cones must have much greater than normal cone spacing and becomes very long, about 50-60% of storm drogue length length even though it contains only 20% of the number of cones. This is quite cumbersome compared to a single unit, with no apparent advantages. The combined effects of inefficient shape (essential, because so many must be built), close draft, and small size (unstable near surface) are limiting to the function of a truncated JSD.

It seems it is a matter of horses for courses. The JSD principle has considerable advantages for severe storm management, but only if designed for sufficient drag to slow the boat to less than 2 knots. If truncated to allow for better movement, the design has no advantages and more failings.